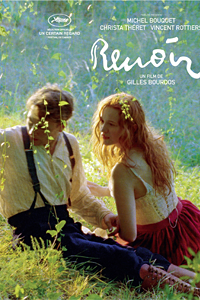 “I refuse to paint the world black,” declares Pierre-Auguste Renoir (the great French actor Michel Bouquet) in “Renoir,” Gilles Bourdos’s compassionate late-life portrait of this French Impressionist painter, infirm with rheumatoid arthritis. “A painting should be something pleasant and cheerful,” he adds. “There are enough disagreeable things in life. I don’t need to paint more.” It is the summer of 1915 and Renoir, 74, has just lost his beloved wife, Aline. He will die four years later. The great man, now rich and famous, is slavishly attended by a retinue of female servants, several of whom are former artist’s models, at his farm, Les Collettes, at Cagnes-sur-Mer on the Cote d’Azur. World War I rages to the north. His two older sons, Pierre (Laurent Poitrenaux) and Jean (Vincent Rottiers), have both suffered serious battle injuries. Early in the film Jean returns home on crutches to convalesce from a wound that nearly cost him a leg. A third son, Claude (Thomas Doret), a k a Coco, in his early teens, lives on the property. Despite laboring in excruciating pain, which requires his hand to be tied to his paintbrush, Renoir remains obsessed with the way “the velvety texture of a young girl’s skin” absorbs the light. He experiences a surge of vitality when he meets the 15-year-old Andrée Heuschling (Christa Théret), a k a Dedee, a voluptuous, mouthy, high-strung redhead recommended as a model by Henri Matisse. “Too early, too late,” Renoir comments wryly, meaning that their age difference prevents them from becoming lovers. For Renoir, Andrée, who has a ravenous appetite for life, is the spirit made flesh, a beauty “Titian would have worshiped,” he announces. Renoir’s philosophy is distilled in five words: “Flesh! That’s all that matters.” While watching the movie, exquisitely photographed by the Taiwanese cinematographer Mark Ping Bing Lee (“In the Mood for Love”), you may surrender to that unabashedly sensual vision, celebrated in every shot of Les Collettes’ gorgeous, seething landscape of windblown trees, grass and streams that reflect what Renoir calls “the fury running through my nerves.”