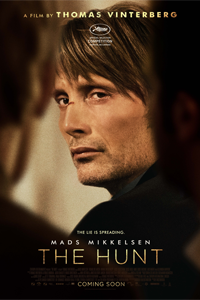 Thomas Vinterberg burst onto the international scene in 1998 at Cannes with Festen (The Celebration), a malevolently comic drama in which the ugly truth of childhood sexual abuse poisoned the air and blew away the happy hypocrisy of a family reunion. In the Danish director’s most powerful film since then, The Hunt, the charge of pedophilia again plays an explosive role, only this time the allegation is based on an impulsive lie, making it even more bitter when the fallout spirals violently out of control. It’s difficult to watch but riveting.

Propelled by Mads Mikkelsen’s shattering performance as the blameless man whose life threatens to be destroyed, the film is superbly acted by a cast that never strikes a false note or softens the impact with consolatory sentiment. The same strengths distinguish Vinterberg and Tobias Lindholm’s screenplay, which spins a psychological horror story rooted at every step in credible reality.

The film is fundamentally about the speed at which lies, gossip and innuendo can become cemented as fact in public opinion, and about the disturbing power of suggestion on young minds. But it’s also about the fragile nature of trust in communities and among friends, particularly men. It shows how easily masculine bonds stretching back years can be broken and how willingly a band of brothers can betray one of its own.

Lucas (Mikkelsen) is a beloved member of one such group of small-town deer-hunting buddies, whose rowdy get-togethers are fueled by booze and bonhomie. Bouncing back from the loss of his teaching job and a messy divorce, he is just starting to get on his feet again. He has a new job at a local kindergarten, begins a promising relationship with a foreign co-worker (Alexandra Rapaport), and after having limited access to his adolescent son Marcus (Lasse Fogelstrom), it now appears likely the boy will be moving back in with him.

Mikkelsen imbues Lucas in his earliest scenes with such warmth and compassion, particularly around the adoring kids at work, that it’s heart-wrenching to hear the alarm bells going off when the drama’s nightmarish chain of events is set in motion.

Klara (Annika Wedderkopp), the young daughter of Lucas’ closest friend Theo (Thomas Bo Larsen), develops an innocent crush on him. But when her displays of affection overstep normal boundaries, Lucas gently draws a line, which she misinterprets as a hurtful rebuff. Her imagination sparked by a pornographic image glimpsed on her brother’s iPad, Klara responds to the concerned questions of kindergarten supervisor Grethe (Susse Wold) by saying that Lucas exposed himself to her.

The film stirs indignation via the blind ineptitude with which Grethe addresses the allegation, involving a seemingly under-qualified external child psychologist, colleagues, parents, and eventually, police. But what’s even more upsetting is Lucas’ helplessness to correct the misinformation, given that Grethe refuses to tell him the source or even the exact nature of the charge. Parents advised to look for signs of trauma in their children suddenly begin seeing them everywhere.

Virtually overnight, Lucas finds himself ostracized by the community, shunned by all but one loyal friend (Lars Ranthe), physically assaulted and subjected to a particularly vicious reprisal that causes both him and Marcus considerable grief.

While witch-hunt stories like this one peaked in the news some 20 years ago and have been dramatized on TV and film before, The Hunt is still shocking. That’s thanks to the skill with which Vinterberg, Lindholm and editors Anne Osterud and Janus Billeskov Jansen modulate the crescendo of paranoia, judgement and injustice.

Adding to the sorrow at the drama’s heart is Klara’s confusion. Even when she volunteers that it was a silly thing she made up, her mother (Anne Louise Hassing) muddies her grasp of the situation with leading talk about the repression of unpleasant memories. However, any sense of individual responsibility remains secondary to the sober acknowledgement of the role played by societal conditioning and adults’ instinctive belief in the innocence of children. Following a painful resolution, the film’s chilling coda makes it clear that the damage can never really be undone.

The elegantly framed widescreen compositions of cinematographer Charlotte Bruus Christensenmaintain a certain detachment in the establishing action, bearing witness to the awful events with distressing clarity. And Nikolaj Egelund’s delicate music is used with economy to punctuate the two-month ordeal, never to artificially stoke tension as a heavier hand might have done.

But while it’s crisply executed, The Hunt is very much an actor-driven film. As the child who triggers the maelstrom and then gets bundled out of its way, Wedderkopp gives a performance of uncanny naturalness and vulnerability, while as the teenager caught in the crossfire, Fogelstrom is equally good.

Intense, wounded, wrung out and pushed to the brink of insanity, Mikkelsen’s Lucas is a devastating characterization, all the more so because his outbursts of rage are so infrequent. Continuing on from his impressive work in A Royal Affair, which premiered in Berlin, this is a tremendous year for the Danish actor, best known to international audiences as 007’s nemesis in Casino Royale.