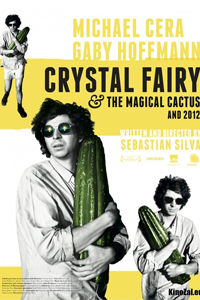 To say that drug use is central to the plot of “Crystal Fairy” is not only a gross understatement, but also entirely beside the point. The consumption of mind-altering substances — more specifically mescaline, in the form of a soup made from the San Pedro cactus — is what drives the film’s story, which follows a group of five young people in Chile on a mission to find and consume the psychoactive compound. But it’s the psychological, even spiritual, transformations that occur over the course of their experience that the movie, in its marvelously underhanded way, is really about.

Directed with a loose, haphazard style by Chilean filmmaker Sebastian Silva, using what he has called a 12-page outline rather than a detailed script, the film centers on an example of the proverbial ugly American, played by Michael Cera. Cera’s Jamie is a boorish, privileged slacker living in Chile, where he has persuaded his friend Champa (Juan Andres Silva) to chauffeur him on the road trip. Accompanying them are Champa’s brothers, Lel and Pilo (brothers JoséMiguel and Agustin Silva, who, like Juan Andres, are the director’s real-life siblings).

What catalyzes the action is not the mescaline they ultimately procure and take, while camping on a starkly beautiful deserted beach, but the arrival of the film’s title character, a young American hippie traveler (Gaby Hoffmann) whom Jamie meets at a party and unwittingly invites along, while in a booze-, pot- and coke-induced haze.

Crystal Fairy, as she calls herself, almost immediately disrupts Jamie’s monomaniacal focus on drugs, which comes across as an obvious defense mechanism against what appears to be an otherwise paralyzing fear. During a pre-drug bonding session, when they are all — at Crystal’s insistence — sharing their fears, Jamie will admit only to being frightened by the ocean and sharks, because they can be swimming under you without you knowing it.

It’s pretty clear that he might have some metaphorical sharks of his own swimming in his deepest subconscious. On the surface, he’s a Grade A jerk, and pretty mean to Crystal, whom he dubs “Crystal Hairy” for her magnificently unshaven body hair, displayed, unself-consciously, during the group’s first night together in a shared hotel room. While his traveling companions seem capable of enjoying life, each other and the trip itself, Jamie’s obsession with the cactus borders on desperation.

For her part, Crystal nicknames him “Pollo” (Spanish for chicken).

Once the group takes the mescaline, which the actors are said to have actually ingested, the real action begins. Rather than a drug-induced catharsis, however, the emotional breakthroughs that occur with Crystal and Jamie seem prompted by their shared human connection, and not a chemical one. In a profoundly moving scene, Crystal delivers an emotional confessional that seems like one she might have delivered even without being high. As for Jamie, his small nervous breakdown — manifested as an apology and a bout of unexplained tears — seems like the beginning of something huge. As Jamie, Cera seems to go deeper and darker than he has ever gone before. As Crystal, Hoffmann is wonderfully natural, as are the Silva brothers. But it’s Hoffman’s performance, in which she is often both literally and emotionally naked, that lingers.

And just like that, “Crystal Fairy” ends, leaving the audience wondering, for a second, what just happened. On one level, the answer is: not much. Part drug comedy, part psychological drama, the movie is slight, but only superficially so.

As the closing credits roll, we’re left not with a sense of a day at the beach, but of what might be swimming out there, in the dark of the abyss.