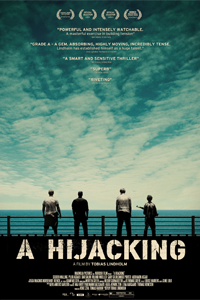 Negotiation is a transaction that results in compromise: what we're willing to live with to get on with business. The value is measured not in worth but rather in cost. So when lives are at stake, how do negotiators arrive at a tolerable number?

"A Hijacking" starts by introducing us to the 7-man crew of a Danish cargo ship, on their way home from the middle of the Indian Ocean. It then takes us to Denmark, where the CEO of the fleet, Peter (Søren Malling), proficiently talks Japanese businessmen down to just under $15 million on an unnamed deal. Shortly after, Peter discovers that Somali pirates have hijacked the ship we saw only moments ago. When they ask for $15 million in exchange for the lives of the crew, Connor, the hostage negotiator, advises to offer them a paltry $500,000.

The lowballing is meant to convey that the corporation won't bend for bandits, but if it were up to the crewmembers, Peter would give the pirates whatever they want. Of course, if he did, they'd just ask for more. The situation is impossible, which is why the hostages endure captivity for over four months.

This film is about the glacial pace of these types of negotiations. There's no hero in "A Hijacking." Nobody throws punches or tries to wrestle a weapon out of a pirate's hands. Everyone is just forced to wait. If anything, the film exposes the deep moral callousness of those doing the dealing, and the desperation of the people they break.

Because Director Tobias Lindholm is interested in all the tensions of this interaction, the experience is consistently engrossing, if unsettling. The crew lives in constant fear of their gun-toting captors, even when they somewhat befriend them. Their quarters are awkward and cramped, not meant to be shared with some 25 errant pirates.

On the other side, Peter is anxious to wrap things up, but he also can't be bullied into bankruptcy. The hostage negotiator warns him that he should outsource the bargaining to an unbiased expert, but Peter refuses. "This is my company, it's my ship, these are my men," he declares. A tragic flaw, since the pirates have the foresight to hire their own translator-negotiator, Omar (Abdihakin Asgar), to do the talking.

Even Omar wants to remove himself from the situation. "I'm not one of them," he keeps insisting to the crew and to Peter. He sees himself as a hired hand with a linguistic advantage — not a criminal — and gets swiftly angry if anyone suggests otherwise.

The bulk of the stress revolves around 12 phone calls between Peter and Omar. Connor is always present to make sure each conversation never gets frantic. The one time things reach Samuel L. Jackson pitch, there are immediate consequences.

The film earns Dogme points with handheld cinematography and uncomfortable, sometimes inefficient lighting. But Lindholm wanted to achieve maximum realism. So the boat scenes were filmed on a real ship in the Indian Ocean. A satellite phone was set up on the boat to make phone calls to the actors in Denmark, so echoes and lagging weren't scripted and the reactions were often improvised.

Gary Skjoldmose-Porter, who plays Connor, is an actual hostage negotiator. He convinced Lindholm not to create a plasma screen-filled situation room and instead opt for a small conference set-up and sticking red tape on the phone the CEO would use. Other non-actors include 4 of the crewmembers of the MV Rozen, which was hijacked by Somali pirates in 2007.

"Violence is expensive," is the simple — and loaded — thing that director Alrick Brown said during Ebertfest 2011, when someone asked him why there was a lack of bloodshed in "Kinyarwanda," a movie about the 1994 Rwandan genocide. That's why all the violence in "A Hijacking" occurs off-screen.

To create terror in the minds of the viewers, indie film directors must acknowledge the horror without filming it, and demand strong performances from the actors. This is especially applicable to the character of Mikkel (Pilou Asbæk), the ship's cook. "A Hijacking" follows him as he progresses from anxious to angry, resigned, and finally, shell-shocked.

When he witnesses a violent act, the dread doesn't register. What his obvious despondence says is, "this wasn't worth it." That's so much more terrible than seeing what he saw.

"A Hijacking" is a fascinating examination of failed diplomacy and everything that's wrong with a system that places so little value on human life. That we care what happens to the crew is what's right with us, even if it's inadequate.

Those concerned about subtitles can rest assured that enough of the dialogue is spoken in English, confirming that it's still the international language of business, even the dirty kind.