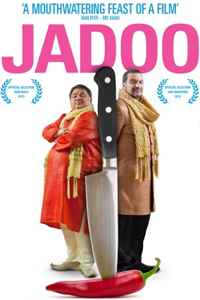 Manisha Pandit, creator of the Indian Food Rocks food blog and food writer for Whole Foods will introduce the film.

Officially kicking off the 2013 Berlin Film Festival's Culinary Cinema section is the world première of light-hearted British delicacy Jadoo (2013), from the team behind 2011's Resistance. Trading the rolling hills of the Welsh countryside for an urban setting, the director, Amit Gupta, returns back to his roots with his second feature. Portraying competing Indian restaurants in his native Leicester, Jadoo is a warm comedy that neatly balances its specific and more general themes and is liberally seasoned with laughs. We begin as Shalini (Amara Karan) returns to her hometown to inform her family that she is getting married.

Shalini's one wish for the wedding is that both her father, Raja (Harish Patel), and uncle, Jagi (Kulvinder Ghir), will attend but the feuding restaurateurs are cold to her pleas. Their fierce rivalry has been ongoing for twenty-odd years, with each possessing half of their mother's fabled recipe book. Between them they would own the best curry house in Leicester, but their refusal to patch things up sees them both suffering. Even Shalini's impending nuptials seem to be insufficient grounds for reconciliation but perhaps an upcoming cookery contest might just do the trick.

An aromatic infusion of Anglo-Indian tradition and universal family values, Gupta's Jadoo is a tasty treat. Built around stories from the director's own youth, it creates an entirely relatable predicament and injects its story with well observed moments of culture and wit. At its centre are a series of fine performances with both Patel and Ghir clearly revelling in their entertaining characters and the tale's comic potential, but this never serves to undermine its more genuine side. There are a few minor snags along the way, wherein the film doesn't quite make the most of its rich potential. One sequence, in which the locals celebrate the Hindu "festival of colours," Holi, certainly feels as though it could have been more expansive.

That is to take little away, though, from a delightfully enjoyable comedy. Littered throughout all of this are dishes to die for. Treading the fine line between appearing both incredible and real, the food on display will have audiences salivating....