A Place at the Table 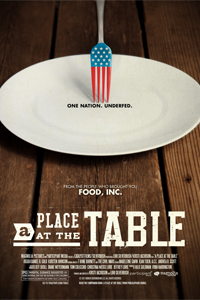 A Place at the Table presents a shameful truth that should leave viewers dismayed and angry: This nation has more than enough food for all its people, yet millions of them are hungry.

The film bolsters its case with plenty of facts, charts and expert testimony - evidence typical of this sort of advocacy documentary. But what makes the movie compelling is its focus on a handful of victims, who make the statistics painfully real.

There's Rosie, for example, a small-town Colorado girl who has trouble concentrating in her fifth-grade class because she is hungry. She says she sometimes pictures her fellow students and teacher as pieces of fruit. And Barbie, a North Philadelphia mother of two, is dismayed to learn that, when she finally finds a low-paying job, she is disqualified for today's equivalent of food stamps (called SNAP, the Supplemental Nutrition Assistance Program)...

Filmmakers Kristi Jacobson and Lori Silverbush make it clear that the issue isn't simply one of insufficient food. A Place at the Table looks at how important reforms are hampered by Washington politics, and how our agricultural subsidy system results in cheap junk food, which means that poor people can be both "food insecure" (to use the currently fashionable term) and "obese."

A Place at the Table