With David Kopel in person! 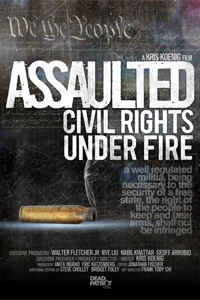 Opening with a male country singer crooning, "We might as well give up and run/If we let them take our God and gun," Assaulted (narrated by Ice-T) might well inspire groans at first, especially as it seems to be taking the familiar rightwing agitprop approach to the subject of gun control. What follows though, is a surprisingly thoughtful, well-researched attempt to give both sides of the argument respect while illuminating the long history of tensions surrounding gun ownership in America. Writer-director Kris Koenig rolls out fantastic archival footage, newspaper clips, and old photos, as well as historians who illuminate the racial and class biases historically held by many of the Americans calling for gun control—and who make clear how those biases are still very much in play. He also showcases gun advocates from demographics that might surprise some viewers, such as LGBT activists and groups of disabled Americans. Yes, Ted Nugent also makes an appearance, and it's unlikely that stalwarts on either side of the matter will change their minds. But that doesn't seem to be Koenig's goal. While the film leans more heavily toward gun-ownership, finessing that position with a nod toward left-leaning politics, its real purpose is to bring some historical perspective to the argument, to move the conversation beyond emotion-based rhetoric.

Co-promoted by The Independence Institute