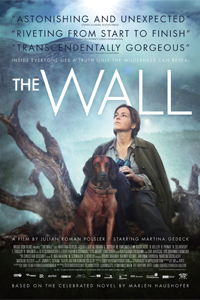 Based on Marlen Haushofer's 1963 novel, the film version of "The Wall" comes from adapter-director Julian Roman Polsler, making his feature film debut after years in television. He gets his audience very nearly drunk on all that intoxicating widescreen scenery (nine cinematographers are credited, along with six editors). But there's a quietude and simplicity to his approach, and we stay close to the interior life and thoughts of the narrator. "The Wall" rests on one actress' shoulders, and the actress is excellent: Martina Gedeck, best known to U.S. audiences from "The Lives of Others" and "Mostly Martha."

Haushofer's unnamed character is introduced in a dark corner of a wood-beamed cabin, writing what she calls her "report" on the bizarre facts of her recent life. Visiting, with friends, this remote hunting lodge, the woman is mysteriously left alone with her friends' dog, Lynx. They venture out, searching for signs of the missing hosts. First the dog encounters the invisible wall, then the woman. "Smooth, like a window pane," she writes in her report.

Life goes on all around her, after a fashion. The crows continue to caw; a cow, which she names Bella, becomes her companion (along with the dog) and gives birth; a couple of cats slink around and make themselves at home. One day, hiking near the force field she cannot understand, she spies an old man at a well, with his wife nearby sitting on a cabin porch. They are motionless. Dead? Frozen in time? The wall separates the woman from these two figures, and from all other human contact. Or nearly all, as we learn in an arresting climax.

In the novel, we learn more about the woman's past (she's a widow in Haushofer's book), and there are intimations in the original work of a nuclear disaster, akin to those in Cormac McCarthy's later novel "The Road." Viewers may recall "Cast Away" and other, more commercial treatments of this Robinson Crusoe scenario. Haushofer's touch has more in common with her fellow Austrian novelist Thomas Bernhard and his psychologically stranded beings. Here, the psychological dimension is made manifest by a nice, fat allegorical symbol of confinement.

One can read this experience several ways simultaneously: as a meditation on solitude, a comment on the self-imposed partitions we place between ourselves and others, a back-to-nature reminder of the order of things. Gedeck's fascinating performance presents us with the stoical woman in the present, as a long-accustomed chronicler of her own strange account, and in flashbacks (the bulk of the picture), an evolving creature being shaped by her circumstances. In achingly beautiful widescreen imagery, the Austrian valleys and forests come alive on screen. The voice we hear, sparingly and effectively, on the soundtrack of "The Wall" is the voice of reason in an unreasonable, unknowable place.

"I had to stay very calm and simply get through it," she says, realizing that this will be her new life. Contrary to that statement, "The Wall" is no endurance test; rather, it presents the facts of the case, adding an eerie low hum to the soundtrack whenever Gedeck's character edges near her outer limits.