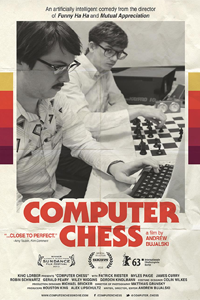 "Computer Chess" is a lot of things, a satire about the dawn of the computer age and a black comedy about the human desire to transcend the self - and the wrong paths that people take in that pursuit. It's some variety of near-great movie, but not the type that sends audiences out transformed and exhilarated. The rewards here are different - contemplative, melancholy, peculiar.

Although its precise meaning is elusive, the film has a way of expanding in the mind days later. And the soul of it - the essence of it - is clear. "Computer Chess" is an elegy for the last moment in history when human beings were not enslaved and supplanted by their computers.

It's set in the early 1980s and filmed using a video camera from that era. If you were around back then, you might remember that if you put the camera on someone standing in front of a strong light, the person's head would partly disappear. That happens at least once in "Computer Chess" - so the camera work is certified authentic.

Shot in the style of a mock documentary, the movie takes place mainly in a hotel, where computer nerds have gathered to test out their chess-playing programs. They compete with each other, with the winner to play the conference head (Gerald Peary). In the world of the movie, a computer has never beaten a person.

We think of being on the ground floor of technology as lucrative and exciting, but "Computer Chess" captures the other side of it, what it's like to be at the beginning of something and not know where it's going, the wistfulness of working in an enterprise that won't take off for years. The computer business in 1982 is like the movie business in 1902, or the car business in 1892. It's almost there, but it's not.

Staying at the same hotel as the nerds is a group of old swingers having a weekend encounter session, and the filmmakers' placement of these two events side by side is inspired. The nerds and the swingers are both seekers, with an exalted vision of human capacity. They both are working toward their conception of utopia, and they're both, in different ways, pursuing dead ends. One is body without mind; the other mind without spirit.

The humor in "Computer Chess" is extremely subtle. There are no gags, no punch lines, but everything in it is a little bit funny, and if you laugh at any moment, the response is appropriate. But it's the humor mixed with sadness that gives the movie its special quality, that makes it end, you might say, on a full chord rather than a thin note.

By the way, just one tiny anachronism. Someone, referring to a problem, calls it an "issue." People in 1982 didn't have "issues," they had problems, which are a lot more dignified. When people have problems, they solve them. When people have issues, they sit back and watch them ooze.