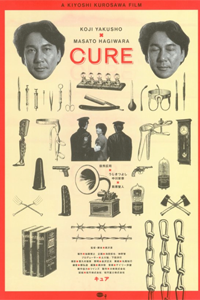 Cure is something of a landmark film in the career of director Kiyoshi Kurosawa. Despite the fact that he had been very steadily making films (at the rate of about three a year) since his 1983 debut Kandagawa Wars (Kandagawa Inran Senso), his international breakthrough came when Cure toured the world's film festivals during the course of 1998.

Cure was the right film at the right time. It arrived at a moment when the serial killer film had become a Hollywood mainstay thanks to The Silence of the Lambs and Seven, and audiences were growing accustomed to cryptic supernatural tales that refused to disclose their secrets from their weekly dose of The X-Files. But with its razor sharp dissection of the ills of contemporary life, Cure also offered a lot more than atmospheric psycho scares.

Even though Kurosawa has continued his prolific output since then (including 1999's thematically similar Charisma), Cure somehow refused to go away, with a U.S. theatrical release following in 2001, in the wake of a renewed interest in Japanese horror cinema spurred on by Hideo Nakata's international cult hit Ring. Inevitably this prompted more than a few to dismiss Cure as a cash-in, despite the fact that it was made over a year earlier and that the line of influence more likely runs in the opposite direction.

Because quite frankly, to compare Cure to Ring is to sell it short. Cure is not a tale of the supernatural. Rather, it is a take on the serial killer film, and a revisionist one at that. The story concerns a number of murders in which the victims have all died from a very peculiar knife wound: a large X has been carved into their flesh, across the throat and chest. Even more peculiar is the fact that despite the identical MO, each of the murders is committed by a different person and this person is always found near or at the scene of the crime. None of the culprits are linked, none appear to have a motive for the crime, nor have they any idea of the reasons behind their actions. "It seemed like the most normal thing to do," is their answer.

Police detective Takabe (the ubiquitous but always excellent Koji Yakusho) is put on the case with the assistance of a psychologist (played by former pop singer Tsuyoshi Ujiki, who starred in Takashi Miike's Full Metal Yakuza that same year). At a total loss at first, their only guess is the influence of television or film, a hunch as quickly dispelled as it is suggested. Then after several more murders they learn that each of the unwitting killers came into contact with a young drifter just before the crime took place. When he is brought into custody, it turns out he is an amnesiac - an enigmatic figure who is amazingly adept at hypnosis and continually asks people the same question: "Who are you?"

His presence and behavior have a pernicious effect on Takabe, a man already under stress on account of his wife's mental illness, and as he finds it harder and harder to control his temper and emotions, a battle of wills between the two ensues. A battle which will have to end in the demise of one or both of them.

Cure is an unnerving and unsettling film. Director Kurosawa proves to be an absolute master at creating a bleak atmosphere that chills the viewer to the very bone. Many subtle elements are combined to powerful effect. Locations are cold, run-down, deserted and dilapidated, characters are enigmatic and painted in shades of grey rather than black and white, the acting is understated and the unique use of sound thoroughly unnerving. Gore and blood are glimpsed occasionally and are presented in a way that is detached and observing.

When the house lights come up after a Kurosawa film, our return to reality is not comforting, but disturbing. We have seen our own contemporary world pass by on the screen, in all its ugliness. A return to normality is out of the question, because it’s that very normality that Kurosawa questions. Like Cure’s drudging hypnotist and his persistently repeated question, which is intended to make us look beneath the veneer of respectability by which we define ourselves, and to look into the darkest nether regions of our individual personalities. Without exception, the truth that hides there is uglier than we ever believed possible, and those nether regions are in fact dangerously close to the surface.

In Cure, the killer is not a mythical other, an individual whose homicidal psychosis is intended to make us feel better about ourselves because we are more ‘normal’ than him. We can find comfort in the fact that none of us remotely resemble Hannibal Lecter. But where is that comfort when the killing is done by people very much like us: a schoolteacher, a doctor, a businessman, a beat cop? In Cure, evil is not isolated. The killer lurks in all of us.

Cure is a horror film in the purest sense of the word; its ability to unsettle the viewer is second to none. In it, Kiyoshi Kurosawa unleashes a shadow. It is the shadow of apocalypse, an apocalypse which is not seen or heard, but sensed. And it's creeping ever closer.