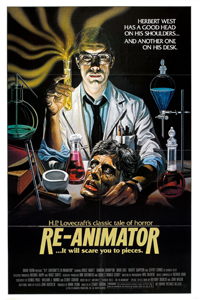 Re-Animator might be one of the most generous of all American horror movies; released in 1985, it suggests what Jonathan Demme could have done with a low-budget go-for-the-guts splatter film. In the tradition of the films Demme was making around that time (Melvin and Howard, Something Wild), Re-Animator is simultaneously a parody and celebration of American chaos and kookiness. Many films have copied Re-Animator's memorable gore effects, but few have ever captured its remarkably sweet temperament.

At its simplest, the film is a mad-scientist story, and director Stuart Gordon and his co-writers, working from a series of stories by H.P. Lovecraft, are clearly aware of the classic implications of the horror film's prototypical mad scientist—namely, that he's an eccentric, largely lacking the social graces necessary to getting laid, who sublimates his unmet desires with experiments designed to render the traditional sexual act moot. Creating, or in this case, re-animating life is an act of playing God, but it's also a hostile gesture toward womankind, an attempt to rob them of their monopoly on the perpetuation of the species as well as embrace a less emotionally complicated form of coitus.

The mad-scientist story, then, is a revenge-of-the-nerd tale, and Re-Animator often plays as a well-made Revenge of the Nerds if it had featured non-traditional zombies. Third-year medical student Dan Cain (Bruce Abbott) is basically the living embodiment of what used to be referred to as "all-American": good-looking, hard-working, and dating Dean Halsey's (Robert Sampson) beautiful daughter, Meg (Barbara Crampton), who he intends to marry upon his graduation. But the recent appearance of a new classmate, Herbert West (Jeffrey Combs), threatens to warp Dan's unquestioning good intentions.

The film is a love triangle between two attractive functional people and the dysfunctional genius that comes between them. The plotting is telling: West is only allowed into Dan's life because Meg refuses to move in with her boyfriend and assume part of the rent, which allows West to move his controversial experiments into Dan's basement and, in an effort to produce a serum that kick-starts a dead human brain, inadvertently kill everyone who matters to Dan.

Gordon, who's since directed a number of woefully underrated and increasingly socially conscious horror films, manages a tricky tone of compassionate self-awareness. Re-Animatoralmost immediately reveals itself to be a parody of wounded male ego. Everything goes wrong because the dueling mad scientists, West and his twisted would-be mentor Dr. Hill (David Gale), get themselves into an escalating pissing contest that eventually manifests itself in a gory bloodbath—which culminates in the notorious pun that finds Meg getting head in more ways than one.

Combs, Sampson, and Gale are as over the top as the outrageous, deliriously inventive special effects; you can practically see a proscenium arch when they're on screen, as they're (necessarily) pitching their roles to the highest theater rafters. As the film's straight man and viewer surrogate, Abbott effectively grounds the film's quieter moments in a somewhat recognizable emotional reality.

But Crampton is the unsung hero here, and not just because she's disarmingly gorgeous. Meg is the film's emotional lynchpin—the one entirely innocent victim caught in the fellas' crossfire—and Crampton plays her with a confident, unvarnished purity that's reminiscent of Nancy Allen's performance in Blow Out. The role was probably partially intended as a parody of the gorgeous horror-movie scream queen, but Crampton plays it with a playfulness and vulnerability (both of which contribute as much to her sex appeal, and horror-movie nerds' subsequent fondness for her, as her looks) that transcends the limitations associated with many babes of the genre, and it's a testament to Gordon's characteristic decency that Crampton has been afforded the opportunity to make that kind of impression (a few of Crampton's line deliveries, such as "What about what we could do?" are authentically heartbreaking). Re-Animator is justifiably remembered quite fondly as a rowdy and gory detonation of taboos, but it's the quieter touches, like Crampton's performance, that give the film a less readily resolvable texture. Lets it put this way:Re-Animator is the splatter-comedy ode to egocentrically dashed American dreams.