Eyes of the Spider 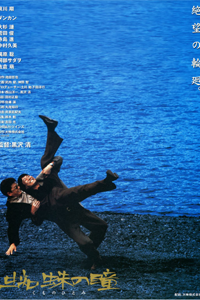 There’s a prejudice one finds even in seasoned reviewers of foreign films that each movie, as it stands, is the filmmaker’s referendum on his own culture. To be sure, this idea also infests criticism of many homegrown products of culture, but knowing when someone’s being facile and narrow about one’s own culture is easy. It’s simplistic and stupid and wrong to say all films made in the U.S. are, pro or con, about cocksure American world supremacy. To find some sort of national narrative in foreign films is, at the very least, reductive. Not all post-war German films are about Germans coping with the Holocaust, not all pre-1997 Hong Kong movies are about the coming assimilation into China. And not all Japanese films are about the individual coming to terms with a society that favors group conformity and structure over individuality.

That said, this is kinda exactly what Kiyoshi Kurosawa’s movies focus on. But his lens doesn’t focus entirely on simplistic “individual crushed by outside conformity” stories. They look at how a man’s position in society and the assumptions concomitant with that position affect his actions and view of himself.

Eyes Of The Spider and The Serpent’s Path are sometimes called the same story remade twice. That’s a misnomer. Both have the same starting point (a father gets revenge for the death of his daughter) and both are Yakuza films, but each moves in an entirely different direction, at divergent paces and with different points of view. While Eyes Of The Spider looks at the cost of revenge on the individual, The Serpent’s Path follows an appropriately more serpentine path into a story of one victim’s complicity with his own misery.

Both films star Sho Aikawa (a Kiyoshi Kurosawa and Takashi Miike regular) in the role of Niijima, though in each film Niijima is a different person. In Eyes Of The Spider he is the vengeful father, and in the opening moments he finds his daughter’s murderer and exacts justice upon him. For the rest of the film, Niijima acts and reacts like a man wandering through an afterworld, where nothing quite matters. He quits his job and he tells his wife they should go away on vacation forever. Eventually, through a personal connection, he joins a particularly ineffective wing of the Yakuza and, somehow, becomes an enforcer.

Eyes Of The Spider is marked by absurdity. The head of the Yakuza is an old geologist who’s always dusting rocks, and, in an extended and hilarious take, demands Niijima catch him on a chase through the hillsides. One of the mob flunkies spends his entire time, on boss’s orders, learning to rollerblade, and never quite gets the hang of it. There are double crosses, too: Niijima sleeps with his friend’s girl, not out of romance or revenge, but because she offers herself. All the trappings of a Yakuza thriller are here, but they’re intentionally bloodless and nearly secondhand, because we see them filtered through Niijima’s emptiness.

In The Serpent’s Path Niijima is a facilitator. Teruyuki Kagawa plays Miyashita, the avenging father. He has the coroner’s report on his daughter, and he reads it over and over. He knows the name of the man responsible (or of someone who knows who’s responsible), and with Niijima’s help he captures this man in an industrial park, where he cannot be heard. There, they keep him chained and watching a videotape loop of home movies of the murdered girl, and they wait.

During the day Niijima teaches an advanced mathematics course, where a brilliant young girl solves his equations and posits a poser or two of her own. This aspect of the film is the most elliptical, and frankly I’m a little lost on it. The implication is that the order of the universe is there in the form of equations. This girl, who becomes a fixation for Miyashita, may be a stand-in for his own lost world, and his own lost girl. She has the answer he seeks in his revenge.

Of course, the path twisting around the murderers of this man’s daughter leads to the Yakuza, who are broadly grotesque in the same way the gangsters in Eyes Of The Spider are absurd. Their leader is a crippled woman who wields a sword-cane and is led around by a young boy. The film’s trappings skirt the edge of conventional Yakuza film antics, but the atmosphere is more dreadful than thrilling – it feels, particularly in the final shootout, like each group is trying to get out of somebody else’s horror movie.

Stylistically the films are of a piece. Kiyoshi Kurosawa’s penchant for long takes complements the action in each, and highlights the man’s cinematic virtuosity. Using almost the exact same technique, he can make one scene comic (Eyes Of The Spider‘s chase in the hills), and another almost unbearably tense (the first scene of the man being chained in the warehouse in The Serpent’s Path). There are no quick cuts. When the camera moves it glides or tilts or pans, subtly divorced from the action – observing always.

A conventional moral can be mined from these films. They are revenge stories, and it has been decades since a popular revenge story ended in anything but personal misery for the avenger and platitudes about the cycle of violence. If that’s all you want from these films, you’ll get it. But I see a deeper meaning. InEyes Of The Spider, man’s revenge is a portal to a new world – one where actions are without consequence. He can quit his job, he can be a murderer for the mob, and he can betray his friends and their enemies. Ultimately, he is in a world of nothing. The Serpent’s Path coils on itself to reveal victim as perpetrator, and the father’s madness over the death of his daughter may have as much to do with guilt as it does with grief.

How these films complement each other, other than as examples of Kurosawa’s growing cinematic acumen (they were made after his Western and artistic breakthrough, Cure) is primarily to demonstrate the limitless possibilities of genre filmmaking. What on paper looks like a man repeating himself is in fact the sound of a clarion call to storytellers everywhere. People who make works in a genre: what you have does not need to be a template or a straightjacket. In the hands of a real artist, genre is a set of toy blocks, even an alphabet. What is made from it does not describe the limits of the genre, but rather those of the artist.

Eyes of the Spider