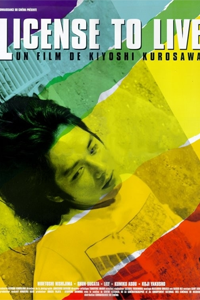 Although Kiyoshi Kurosawa's career, not to mention his image, is characterised most typically by horror and he spent his many years in the V-cinema straight-to-video industry directing mostly yakuza films, License to Live proves that this director is just as adept at handling drama. Or should that be comedy? Because despite dealing with such potentially weighty subjects as the disintegration of the family and a comatose man's loss of his past, License to Live creates more laughs than tears.

Twenty-four-year-old Yutaka (Nishijima) wakes up in a hospital room after lying in a coma for ten years. His family is nowhere to be found: his parents have divorced and moved away, while his sister is engaged and spends much of her life overseas. They have all made peace with Yutaka's seemingly inevitable destiny as a bedridden vegetable and said their goodbyes long ago. The non-conformist loner Fujimori (Kurosawa's token leading man Koji Yakusho), an old friend of Yutaka's father, takes the newly awoken young man under his wing and brings him "home" to the fish farm that serves as Fujimori's main source of income. Fujimori gives him a bed, a job and a crash course in growing up; Yutaka endures the driving lessons and assorted odd jobs, sometimes with glee, but mostly with aversion - as in the case of his first visit to a prostitute, for which Fujimori must muster all his strength to drag the resistant Yutaka in. The young man's reactions consistently reveal the mind and perceptions of a child scared with and overwhelmed by the daunting task of growing up in the span of mere days.

Inevitably, at some point, family members start dropping by, having heard of Yutaka's miraculous re-emergence. His father (Sugata, a veteran of the director's gangster quickies) has left his old life behind and become something of a nomad. As far as he's concerned, Yutaka is part of that old life and he refuses to take responsibility for his son. Yutaka's sister (Kumiko Aso) comes around every now and then with her dim-witted fiancé in tow (Aikawa in one of those great change-of-pace roles so typical of his collaborations with Kurosawa), but she's too accustomed to her breezy life to stick around for long. The only relative Yutaka seems to have any sort of connection with is his mother (Lily), even though she too tells him that he should lead his own life.

Despite the change of pace, Kurosawa's characteristically barren, gloomy visual style is still very much in evidence here. But stripped of the scare tactics, it serves to emphasise the dry comic touches of the story and the characters, and complements the director's refreshing approach to the genre of "human drama" - there isn't an ounce of sentimentality to be found in License to Live. It strays far off the beaten path, shunning the predictability of your average celluloid tragedy to deliver genuine laughs.

The film also once again gives proof of Kurosawa's proficiency as a writer. His Yutaka is a character constantly bouncing back and forth between maturity and childhood, forced to make up in a short span the ten crucial years missing from his mental development. The method by which he finally makes that big step is by rebuilding and reliving one of the happiest moments of his childhood. When the task is completed he is free to leave that childhood behind, but it takes an unexpected outside element for him to finally realise it.

As with Kurosawa's horror and yakuza films, License to Live re-addresses and re-evaluates the rules and expectations of a stilted genre, yet should feel thoroughly familiar to those who know the director's work. Constantly re-inventing while at the same time remaining remarkably consistent is nothing if not the defining characteristic of an auteur, and Kiyoshi Kurosawa certainly fits that bill.