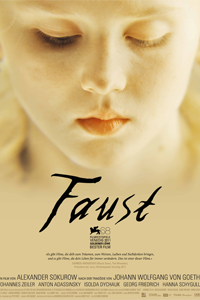 Alexandr Sokurov’s delirious and jovially grotesque take on Goethe’s 'Faust' is a journey you’ll want to take more than once.

Some sage advice care of Alexandr Sokurov’s delirious and jovially grotesque take on Goethe’s 'Faust': Never mix essential oils of dandelion and asparagus with hyena’s liver. Not unless you want a decanter filled with a half-formed weeping baby swimming in an electric pink slurry.

Having already examined the intimate lives of Lenin (Taurus), Hitler (Moloch) and Hirohito (The Sun), Sokurov rounds off his Tetralogy of Power with a phantasmagoric dirge into the desolate soul of grubby alchemist, Faust (Johannes Zeiler), who is ready to make a pact with the devil in order to secure fame, knowledge and pleasures of the flesh. But where those previous films concentrated more on the corrupting influence of power on those who have attained it, Faust glanced at power from the opposite angle, as a device for temptation, sin and self-annihilation.

As the camera plunges down from the heavens in the film’s magical opening shot, it eventually swoops into a grubby Germanic hamlet, through a window and straight on to the petrified genitalia of a male cadaver that’s in the process of being disemboweled.

At this point in his life, Faust has come to realise that he is beset on all sides by squalor and suffering, and the large remainder of the film comprises a puckish, wandering dialogue with a Satanic moneylender (Anton Adasinsky) who bares uncanny resemblance to Count Orlok in Murnau’s Nosferatu.

A thoroughly deserving winner of the Golden Lion at the 2011 Venice Film Festival, Sokurov’s sinewy opus is long, unwieldy and appears to avoid making too many obvious concessions to plot. Yet, it’d be disingenuous to call this a difficult film, as it consistently hums with detail and mystery, and there’s barely a moment where the hovering camera lingers on any one face or object for too long.

The clever and surprising tonal shifts, too, keep you locked into the central struggle, modulating between the scatological, the bawdy, the anguished and the strangely moving, sometimes with a single shot.

Faust is a breathtaking film, even if its sublime technical achievements do tend to occasionally suffocate the pristine simplicity of the tale it’s telling. Even though this is, at its essence, a critique of human fallibility, the cinematic world which Sokurov concocts is fantastical to its core, with random asides including a peek through a telescope of a monkey crawling on the moon, a tavern whose walls leak with wine that tastes of donkey piss, a funeral service overrun by stray hounds and Germany’s greatest living female actress, Hanna Schygulla, dressed in gravity defying Kabuki get-up and darting innocuously through various scenes.

In terms of the way in which Faust’s environment is filmed, imagine Gaspar Noe’s ghost-eye-view camera gliding through a grubby Gothic hinterland created by drunk Jan Švankmajer, and you’re almost there.