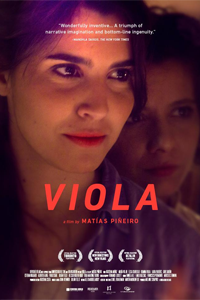 The critically praised Argentine director Matias Pineiro delivers a thematically inventive third feature effort in his mash-up of Shakespeare’s Twelfth Night with a depiction of the romantic entanglements of young artistic bohemians in Buenos Aires. While the pleasures of the brief (65 minutes) Viola are modest, it displays an imagination and stylishness that marks the young filmmaker as someone to watch. The film is currently receiving its U.S. theatrical premiere at the Film Society of Lincoln Center’s Elinor Bunin Munroe Film Center.

The film’s premise is simple on the surface. The title character (Maria Villar) is a young woman who delivers bootleg DVDs throughout the city as part of her boyfriend’s video pirating operation. Along the way she falls in with a group of actresses performing in an all-female production of Shakespeare’s classic.

That’s about it in terms of a plot. The film’s chief conceit is to interweave its examination of the freewheeling love lives of its characters with themes from the work they’re performing, going so far as to incorporate lines from the play into the dialogue. The results, much like Joss Wheldon’s recent contemporary reimagining of Much Ado About Nothing, underscore the timelessness of the Bard’s portrait of the duplicities so frequently involved in affairs of the heart.

Featuring elegant cinematography that captures the beauty of both its South American urban setting and the young women who figure in the action, the film playfully explores the connection between reality and artifice. That, and its torrent of sophisticated if sometimes elliptical dialogue, makes it easy to see why the director has frequently evoked comparisons to Jacques Rivette and Eric Rohmer.

Although it seems at first like an assemblage of small moments, by the time it reaches its conclusion the film has achieved an admittedly small-scale but undeniable emotional power.