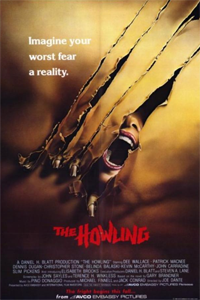 Werewolves are among the most difficult monsters to get right onscreen. They lack the personality of vampires and the bone-chilling terror of zombies. Even so, a few filmmakers have managed to make terrifically effective werewolf movies. John Landis' An American Werewolf in London is certainly among the front ranks, as is Joe Dante's The Howling.

The Howling is a cracking good horror film, anchored by strong performances. Rather than being a stereotypical female victim, Karen is smart, fierce, and formidable, even when she's vulnerable in the face of hairy beasts. The movie is also aided by groundbreaking special effects, which still look phenomenal today. Makeup wizard Rob Bottin developed a smoother, more convincing way to do werewolf transitions than had ever been seen before. Without a doubt, the showstopping moment comes when we spend several minutes watching a character morph into a wolf. This has to be one of the seminal moments in '80s horror.

Beyond that, the movie benefits from Joe Dante's distinctly off-kilter sense of humor. He packs his film with wolf references, including cans of Wolf brand chili sitting in the background of scenes, and a copy of Allen Ginsberg's “Howl” resting on a table. Many characters, including George Waggner, were named after directors who made werewolf movies. Cameos from producer Roger Corman and “Famous Monsters of Filmland” editor Forest J. Ackerman are incorporated in wonderfully humorous fashion.

Dante has always been a master of mixing horror and comedy - just look at Gremlins - and The Howling is surely one of his best works. A few moments look a bit outdated, but other than that, the picture maintains its impact. I don't think there's a better werewolf movie than this.