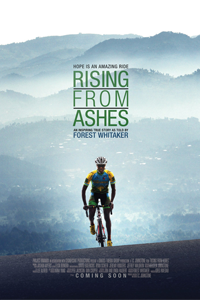 Rising From Ashes, the title of T.C. Johnstone’s uplifting documentary about the creation of the first Rwandan National Cycling Team, has a double meaning. It refers not only to the tremendous spirit displayed by the athletes as they struggle to overcome the horrific legacy of the genocide that occurred a generation earlier, but also the personal redemption of the famed American cyclist who led them.

Opening for a limited theatrical release, the film should garner appreciate audiences upon its inevitable home video and broadcast exposure.

Bicycles assume a prominent role in Rwanda, known as “The Land of a Thousand Hills.” It is a primary means of transportation for the largely impoverished population, although the bikes are usually years old and decrepit. Indeed, one of the cyclists interviewed marvels at the fact that the new bike he’s been given is the first one he’s ridden that was outfitted with brakes.

Famed American bike builder Tom Ritchey explored the country on his mountain bike in 2005 and met a group of cyclists who called themselves Team Rwanda. Inspired by their dedication, Ritchey enlisted his friend and former rival Jock Boyer, who in 1981 made history as the first American to participate in the Tour de France, to become their coach. His championship racing career had been derailed in 2002 when he was convicted of lewd behavior with a minor and sent to jail for a year.

“I overstepped my boundaries with a minor, a girl,” is all the clearly haunted Boyer says in the film about the incident.

The film details his subsequent years-long efforts to whip the Rwandan team into enough shape to qualify for the Olympics. Among his star players was Adrien Niyonshuti, who lost 60 members of his family, including six brothers, in the 1994 genocide.  He eventually became the nation’s flag bearer at the opening ceremony of 2012’s London Olympics, and the segment in which his fellow countrymen gaze at this spectacle with tremendous pride is among the film’s most moving.

Narrated in unobtrusive fashion by Forest Whitaker and featuring a jaunty Afropop soundtrack, the film is crisp and economical, with the filmmaker carefully avoiding extraneous melodramatics. They are, after all, hardly necessary in a tale that already contains such inherently powerful drama.