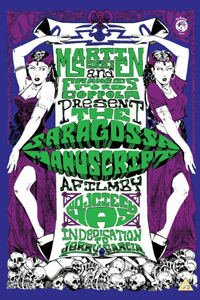 To spark up or not to spark up? That is the question posed by watching Polish director Wojciech Has’s literary epic which is re-released in all its three-hour, mind-melting glory. A loose adaptation of Jan Potocki’s colossal eighteenth-century tome, this rambling, flamboyant and incoherent ‘head movie’ should be approached with caution by anyone who hasn’t got any drugs in their system. Infusing a similar unearthly cadence to the swashbuckling genre that Jodorowski did to the western with ‘El Topo’ (one of few films with which this bares any comparison), Has’s strikingly photographed and thematically dense film uses a mischievous performance from Zbigniew Cybulski as a Belgian officer traversing Spain during the Peninsular War with which to string together a succession of tales, anecdotes and dreams which touch on themes of honour, class, betrayal and theology, and are mostly the result of someone being force-fed a potion from a chalice fashioned from a human skull. Krzysztof Penderecki’s percussive free-jazz score muddies things further. — David Jenkins, Time Out London