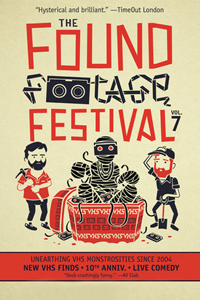 Celebrating its 10th year, after selling out the Boulder Theater for several years, The Found Footage Festival makes its IFS debut! (Yeah, we know their poster says it's Volume 7, but it's also the 10th anniversary. Ask them.)

The Found Footage Festival is a one-of-a-kind event showcasing videos found at garage sales and thrift stores and in warehouses and dumpsters throughout North America. Curators Joe Pickett (The Onion) and Nick Prueher (Letterman, Colbert) take audiences on a guided tour of their latest and greatest VHS finds.

Here's what Nick has to say:

The Found Footage Festival is a live comedy show and screening featuring clips from odd and hilarious VHS tapes we've found at thrift stores across the country. It's hosted in person by myself and Joe Pickett and we play over 140 shows a year across the U.S., Canada, and Europe. The show has been featured in The New York Times, The Chicago Tribune, Wired Magazine, and on National Public Radio, Jimmy Kimmel Live, and Late Night with Jimmy Fallon.