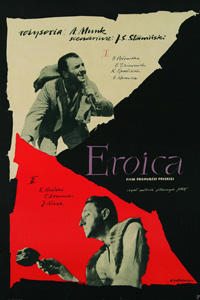 Legendary Polish director Andrzej Munk ("Man on the Tracks"/"Bad Luck"), who only helmed 5 films before dying in a traffic accident in 1961 in the middle of shooting The Passenger (finished in 1963 by friends), helms this post-World War II black comedy that is split into two parts. The first part is titled "Scherzo Alla Polacca" and the second is called "Ostinato Lugubre." It chronicles the Warsaw Uprising, the Polish resistance against the German occupiers, by showing the Resistance in action in the field in the first part and in a POW camp in part two.

The first part deals with a young conscripted soldier Gorkiewicz (Edward Dziewonski), nicknamed Ninny, who was in the black market before the war. During the chaos caused by a bombing attack he returns to his mansion home and discovers his unprincipled attractive wife, Zosia (Barbara Polomska), has been entertaining in their home a genial Hungarian officer named Istvan Kolya (Leon Niemczyk). Before the Hungarian military retreat from the city, Istvan enlists Gorkiewicz to broker a sale of weapons to the Resistance officers. Gorkiewicz, who is anything but heroic, finds himself as a messenger traveling back and forth to the leaders of the Resistance in two distant cities and is caught in the middle of the dangerous war zone. The reluctant patriot gets drunk on a few bottles of Tokay wine as he learns his efforts to profit from the war are riskier than what he bargained for. He survives only because his will to survive, no matter what he must do, is so great.

The second part is set in a German concentration camp, which was formerly a sanitarium. It's seen through the eyes of a new prisoner, Lt. Kurzawa (Józef Nowak), who soon discovers that the only one to escape from the camp, Lt. Zawistowski, is still in the camp and is secretly being cared for by Lt. Marianek and Lt. Turek without anyone else being aware of his presence. It's important that they keep the morale up of the POWs and by having the men think Zawistowski made it to the west, they can alleviate their guilt that they don't try to escape and pretend that things are not so hopeless. Things are not so bad in the camp because the Germans adhere to the Geneva Convention and provide them with enough creature comforts to keep them pacified. The escape makes them feel proud that one of their own acted brave and gives them hope that they may also escape one day.

Munk understands the dark side of human nature and presents a sly satire on heroism. He debunks the standard image of the hero as an idealist and self-sacrificing man. Instead he reveals that in the struggle for freedom it takes all kinds to fight for nationalism and self-determination. It's the work of a deep thinker sardonically reflecting on the insanity of war and the human condition. — Dennis Schwartz, Ozus' World Movie Reviews