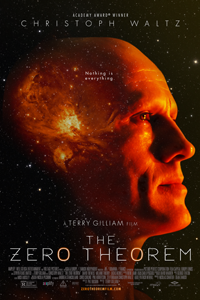 The only Monty Python star who wasn’t born in Britain, you can never accuse of Terry Gilliam taking things easy.

He invariably concocts an extraordinary fantasy world of ‘magic realism’, uses wide angles galore to keep your eyes busy while cleverly subverting our perception of reality.

Years in development, The Zero Theorem carries on from the futuristic, dystopian themes of Brazil (1985) and Twelve Monkeys (1995).

Acknowledging our current ‘so many choices, so little time’ society, The Zero Theorem asks what the meaning of life is in a hi-tech world and whether computer code can ‘make sense of the good things in life’.

And is there a difference between being ‘alone’ and ‘lonely’?

Producer and double Oscar-winning star Christoph Waltz (Django Unchained) is one of the great actors.

His character Qohen might have been called The Bald Head of Notre Dame given his lair inside a derelict church.

Qohen spends hours trying to get his formula to balance out for an Orwellian organisation called ManCom (run by Matt Damon).

John Malkovich might have played Qohen two decades ago, but Waltz is his own man and his performance is never mannered, just brilliant as we wait to find out if his life has been meaningless.

The film lacks an emotional tangent to pull in the mainstream.

But fans of pure cinema will enjoy watching a British director fighting all the way to distance himself from Hollywood’s commercialised gravity even though, bizarrely, the end credits include ‘product placement co-ordinators’.