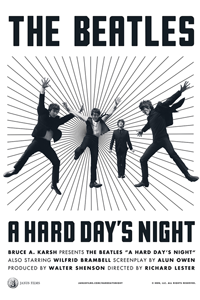 Even if the Beatles had been a fictional band instead of a world-beating rock group, their first film, “A Hard Day’s Night,” would be a classic comedy. This celebration of anarchic and innovative youth hasn’t lost a volt of its live-wire vitality 50 years after it premiered in the U.K. on July 6, 1964.

It’s the rare film that moves like one rush of inspiration. No other movie has so powerfully and uproariously captured young people’s feelings of unlimited energy and immortality, right from its opening shot of a crowd chasing George, Ringo and John as they dash to make a train. George and Ringo stumble and topple on top of each other, then leap up and continue their sprint, laughing and sending John into hysterics. The brilliant director, Richard Lester, held the camera for that entire sequence and conjured an electric lyricism with his zesty black-and-white imagery and fly-on-the-wall documentary style.

The whole movie is an ecstatic mix of serendipity and invention. The Beatles were ready for their cinematic breakthrough. They had always said they loved movies, and they probably got their name from the Beetles, Lee Marvin’s gang in the Brando biker epic “The Wild One” (1953).

They had good taste in films. The group loved Frank Tashlin’s “The Girl Can’t Help It” (1956) for showcasing performers such as Fats Domino and Little Richard in color and wide screen. When the opportunity came for the Beatles to make one of their own, they told film producer Walter Shenson that they never wanted to appear in a “rag-to-riches” story, or “the one about the record being smuggled into the studio in the last reel and put on by mistake.”

So Lester and screenwriter Alun Owen came up with the idea of showing how the Beatles’ phenomenal talent and supernova success had encased them in a celebrity “cocoon.” When Paul’s troublemaking “clean old man” of a grandfather (Wilfrid Brambell) complains that he’s “been in a train and a room, and a car and a room, and a room and a room,” he’s borrowing words that Owen and Lester had heard from the Beatles describing the stops on a tour.

The moviemakers keyed so closely to the group’s good vibrations that “A Hard Day's Night” ends up depicting the Beatles less as prisoners of success – or as larvae trapped in a cocoon – than as dazzling, charismatic butterflies. Their young female fans catch fire from their pop sensuality, and their young male fans soak up assurance from the group's freewheeling confidence. The movie audience gets both by osmosis. When the Beatles sing “She Loves You,” you can tell that each girl watching believes they connect to her alone.

What inspires older fans is the Beatles’ spontaneity and wit. During the 24 hours before their hard day’s night, culminating in a TV songfest, they manage to do things their own way. Ringo tells a journalist that he’s neither a Mod nor a Rocker – “I’m a Mocker,” he says. George informs an ad executive (Kenneth Haigh) that his agency’s “resident teenager” is “a drag. A well-known drag. We turn the sound down on her and say rude things.”

The movie still feels fresh and authentic because Lester was as original and audacious as the Beatles. He both popularized and perfected the quicksilver style of shooting and editing that dominated American movies in the late 1960s and early 1970s. It’s a marvel of direction. In the TV scenes, for example, Lester lightly satirizes the makeup artists who work to take the glare off the Beatles’ brows. He shoots the TV-studio concert scenes above lights, below lights, around lights and directly into lights. He knows that the Beatles’ faces will outshine anything.

And oh, what faces they are! If irony ever had a muse, it was John, tilting his down-turned nose up at bombast and pretension (and briefly seen “snorting” a Coke bottle). Paul has never looked more like a sublime elf than when clowning in a bowler hat and a fake beard. Lester focuses on George’s intense, withdrawn quality until you can sense the moody blues yearning to break out. And Lester turns Ringo into the group’s lovably ridiculous hangdog mascot. “Just four guys who loved each other,” Ringo summarized in “The Beatles Anthology.” You feel that love in “A Hard Day’s Night,” especially when John tries to cheer Ringo up by pulling him into a performance of “If I Fell.”

All the songs were written before the script; it was Lester’s job to fit them into the movie. He staged “I Should Have Known Better,” for example, as an interlude when the boys play cards on a train. He shot the scene twice: once with the lads slapping down cards and once with them playing their instruments. Then he cut it all together according to visual shapes and musical rhythms – a gambit copied by music promo and video directors ever since. When the Beatles break out of their keepers’ care to the tune of “Can’t Buy Me Love” and zigzag through an open field like a mini-menagerie unchained, it’s the most improbably exhilarating musical number in movie history. — Michael Sragow, Orange County Register