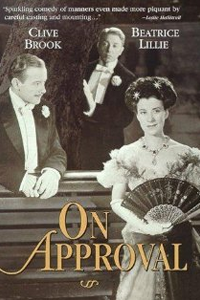 “It’s a polarizing movie. You’re either going to love it or hate it,” predicted film historian Jeffrey Vance this morning in his introduction to ON APPROVAL (1944). But judging from the raucous audience reaction that followed over the next 80 minutes, actually no one hated it at all. ON APPROVAL is a gem of high comedy, and since it was made in England, the Production Code did not apply, resulting in a scintillating mixture of bawdiness, double entendres, and even prodigious use of the word “hell,” which would be unthinkable in an American picture of the era. ON APPROVAL feels like a crazy combination of the Marx Brothers and Oscar Wilde, delivered in a deadpan style. Actor Clive Brook, who plays the role of the Duke of Bristol, produced the film, wrote most of it, and even took over as director partway through shooting when original director Brian Desmond Hurst clashed with him creatively. Brook’s insertion of himself as director was actually a financial decision — there was no more money available to hire a new outside director. But as the only film Brook ever directed, ON APPROVAL stands as a remarkable accomplishment, brimming with visual wit and maintaining a beautifully consistent tone and comedic pace. Considering it’s based on a play (by Frederick Lonsdale), with much humor coming from the delicious comic barbs that fly left and right from all four main characters, it’s quite an accomplishment that the screen version should feel so cinematically alive. Brook re-set Lonsdale’s play from the 1920s into the Victorian era, so that the plot’s central conceit — a couple engaging in a “trial marriage” at a remote Scottish house, with another unmarried couple joining along — would actually feel scandalous. To further the effect, he begins the film with a modern-day prologue containing narration, freeze-frames, slow-motion and the like; toward the end, he throws in a highly imaginative dream sequence. In between, he treats us to gorgeous sets and costumes by Cecil Beaton. It’s a perfect match of content and style: the characters and dialogue may be outrageous and zany beneath their deadpan exterior, but so is the film itself, beneath its own sumptuous-looking surface. As an actor, Brook comes off much like George Sanders did in this era, although Brook seems even more sarcastic and biting in his verbal barbs, if that is possible. A typical exchange: “Didn’t you, in a sneering way, accuse her of being 41?” Brook is asked. He replies, “I did, but she’s not crying because I said she’s 41. She’s crying because she is 41.” Joining Brook are Roland Culver, pretty Googie Withers, and the great comedienne Beatrice Lillie in an extremely rare feature film appearance. The Canadian actress was so famous that she was known as “the funniest woman in the world,” entertaining millions of people over a fifty-year career on stage, radio and television, but only a tiny amount on the big screen. Around the time she made this one, she was spending much time entertaining the troops across the European, African and Middle Eastern theaters of World War II. So in tune was Lillie with her audience that a critic once said, “With one dart of her eyes, she can spare a skit writer a dozen lines.” ON APPROVAL screened today in a brand new print struck expressly for this festival. While not a “restored” print — it still had some scratches from the negative or whatever source material was used — it still looked excellent overall. The sound was fine, too, except for the fact that a few lines were lost due to the loud laughter filling the room! Clive Brook, who retired from the screen after this film (he would come back just once more in 1963 to take a role in John Huston’s The List of Adrian Messenger), would have been proud. — Jeremy Arnold, TCM