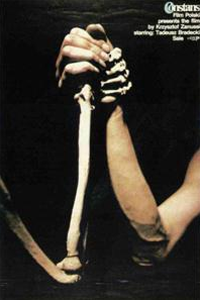 For whatever reason(s), Krzysztof Zanussi has participated in obscuring his artistic signature by doggedly trying to make films that are different from one another. Constans is perhaps his most personal film.

Witold is beset with difficulties. He is his dying mother’s caregiver; at work his idealism collides with the inwardness, rigidness and corruption of an entrenched bureaucracy that mounts a plot against him; and he longs to scale the Himalayas, as his father died doing. Witold’s life appears bleak at the crossroads of his own character and things beyond his control. Finally, he withdraws from the world and becomes a window washer—a grotesque parody of mountain-climbing. The son will never become his father. The integrity to which he aspires must forever elude him.

Witold places his faith in mathematics, believing it can explain his apparent bad luck, and the film’s precise, almost mathematical style is suited to this faith and Witold’s perception of the world. Something human, though, is ever poised to drop into or out of such a view of reality. As a result, Witold unwittingly contributes to a tragic outcome. Constans is breathtaking in its irony.

Zanussi, a former student of physics and philosophy, has fashioned a rigorously intellectual work about self-determination and other-determination. Constans elegantly locates a man’s emotional life in a complex social and political environment. It demonstrates the struggle for survival by an individual whose resilience and intelligence would seem to offer more hope and better prospects. Of all great films, this may be the bleakest, not least of all for its portrait of daily existence in a joyless, programmatic Communist state. Throughout, its cold colors appear on the rim of colorlessness.