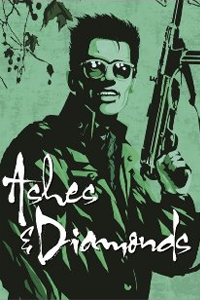 There was a time, and it now seems long ago, when Polish cinema was admired throughout the West. Before capitalism and the market had their evil way, it was characterised by a deep sense of a fractured national identity and by an extraordinarily sharp idea of how a tragic history affected ordinary people.

This renaissance, in the Stalinist 50s, was substantially due to the emergence of a world-class director in Andrzej Wajda, whose wartime trilogy of A Generation, Kanal and Ashes and Diamonds remains one of the finest achievements of Eastern European cinema. A Generation is about a group of young men and women fighting in Occupied Poland; Kanal is the terrible story of the final, abortive Warsaw uprising. But arguably the greatest in the trilogy is Ashes and Diamonds, in which Zbigniew Cybulski became a star - almost a European James Dean.

Maciek is a young soldier in the right-wing Nationalist Army and is ordered, at the conclusion of the war, to assassinate the newly arrived communist district secretary. Maciek is a slightly dandified Polish Hamlet who has fought in the uprising but is now uncertain about continuing to espouse an inevitably lost cause against the left. He bungles the murder, killing two bystanders.

Told to try again, he is hopelessly riven between the demands of conscience and of loyalty, and is further up-ended by falling for a girl in the hotel at which he and the communist official are staying. She makes him feel that his lifestyle is meaningless in the new, post-war climate.

Though he manages to accomplish his mission on the very evening that fireworks announce the end of hostilities (ironically, as his elderly prey is on his way to see his son who has been arrested as a member of a similar underground group to Maciek's own) he is accidentally shot when running from a military patrol. He dies alone on a rubbish dump in a scene reminiscent of Bunuel's Los Olvidados.

Cybulski manages, through Wajda, to express a uniquely Polish sensibility - reflecting his nation's troubled history - as well as the kind of youthful frustrations that are still recognisable today. But Wajda's deeply romantic and personal vision, inspired by both Italian neo-realism and by the more baroque images of Expressionism, makes Ashes and Diamonds a gripping experience too.

Once again, as in most of my 100 films, it is the cinematographer as much as the director who should be praised. Jerzy Wojcik's plastic work is outstanding. Wajda once said to me, when I asked him whether he would prefer the freedom of Western film-making to the artistic constraints of the Eastern bloc, that there were always ways of getting round political censorship but no way to avoid the censorship of money. Later in his career, when his disillusion with the Communist party was complete, he showed - with Man Of Iron, Man Of Marble and several other outstanding films - exactly what he meant.

Ashes and Diamonds is not without irony, such as the moment when Maciek and the Party official fall almost ludicrously into each other's arms as the one kills the other; and the victory banquet at the hotel where the polonaise Farewell, My Homeland is played and where some know their careers are at an end while others prepare to accept government posts in Warsaw.

The title of the novel by Jerzy Andrzejewski, who also wrote the screenplay, is taken from romantic poetry: 'Will there remain among the ashes a star-like diamond, the dawn of eternal victory?' Wajda doesn't attempt to answer this question. And it is the film's ambiguities, as the film-maker tries to come to grips with the myths and legends of the era, that continue to render it fascinating. — Derek Malcolm, The Guardian