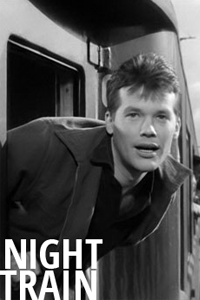 The first film I reviewed for this blog was 'Mother Joan of the Angels' by this director, a stunning account of religious madness and sexual hysteria. His preceding feature, Night Train, is a superbly taut thriller, constantly challenging its audience about the identity of a murderer. Jerzy (Leon Miemczyk), in shades and a suit, boards a train bound for the Baltic coast. He's lost his ticket, but offers to purchase a two person sleeping car entirely for himself so he isn't disturbed. However his compartment is already inhabited by Marta (Lucyna Winnicka), who refuses to leave. Not wanting to make a fuss, Jerzy agrees to share the car. Both are ill at ease, don't wish to speak and act very suspiciously. Jerzy is then pursued by a married woman, who follows him when he goes to a tobacconists at a brief stop, whilst Marta is being chased by her ex-lover Staszek (Zbigniew Cybulski), who acts as if he might explode at any moment. However, the train's passengers soon become alarmed by news that a murderer is on the loose in the area, and even more so when police suspect the murderer may be on the train. Suspicion then falls upon the private Jerzy.

Kawalerowicz does an exceptional job of keeping such a simple thriller so unbearably tense for the duration of ninety minutes. He reveals nothing about Jerzy; why he's behaving as he is, why he has no ticket, or will pay double to get a private car - to point the finger of suspicion at him. Marta acts quite similarly though we suspect this is the fallout of the collapse of her relationship with Staszek (and there are ominious razorblade cuts on her wrists) - plus, we never suspect her as we know the murderer is male. Both seem equally lonely and abandoned, though they never bond. In fact they want to stay out of each other's way as much as possible, though we're never told why.

Beginning with a trademark bird's eye view of the passengers running for the train (used to such great effect in Mother Joan of the Angels), Kawalerowicz creates a claustrophobic environment for his principle characters to inhabit, which is increased greatly when suspicion falls upon the pair and they start a collective mentality of persecution. One thinks of the wicked whispers of Clouzout's 'Le Corbeau' (1943) when a gang mentality can be so cruel and vindictive without much justification. As a thriller, it belongs in the Hitchcockian school (who had his own partially train-based thriller that year with North by Northwest) - the tension is unbearable and well handled at all times, and Kawalerowicz pursues forever relevant themes to his credit. — Kevin Wilson, thirtyframesasecond