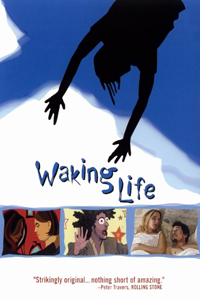 Audiences looking for something fresh and different, not to mention a head trip, will find it in “Waking Life,” an appealing new work from Richard Linklater that can legitimately be called innovative. Shot on digital video, cut, then “animated” via a computer technique called interpolated rotoscoping, pic possesses a sort of floating, impressionistic look that may resemble certain animated films but has certainly never been used to such pointed artistic effect, and certainly not in a feature. Tumultuously received at its Sundance preem, film will be a highlight on the international fest circuit in the coming months and will be the subject of intense interest by animation/computer geeks on the Internet, which will serve as the ideal promotional venue to generate excitement on the road to theatrical release. All the same, this is a light, whimsical piece, and its non-narrative, “Slacker”-like structure and channel-surfing approach to the philosophical issues that preoccupy it foretell a commercial life limited to ardent young fans rather than one embracing a wider public. Pic will also be a big fave with viewers partial to altered-state experiences, theatrically and especially down the line at home.

After running aground with his last two features, “SubUrbia” and “The Newton Boys,” the Austin-based Linklater regrouped to make two unconventional films that are both in Sundance this year, the other being the digitally shot three-character drama “Tape.”

For “Waking Life,” helmer joined forces with computer animator Bob Sabiston, who oversaw the post-production process in which 31 animation artists “drew” over Linklater’s live-action footage, with individual artists generally given separate characters to allow for a variety of styles and interpretations.

Computer technique enables so-called brushstrokes to be “stretched” across many frames of film, which has resulted in a striking effect in which colors, lines, characters and objects are continually flowing and moving. Not only is this perfectly in keeping with the film’s dreamlike state, but the method creates — whether intentionally or not — an aptly unstable visual correlative to the wide assortment of points of view heard in the verbal riffs the characters serve up.

Visual element aside, the best way to characterize the experience of the film is as a sort of undergraduate schmooze session in which lots of well-read, highly verbal, occasionally fatuous individuals offer a collective crash course on modern ways of interpreting human existence.

Sounding board for it all is a young, shaggy-haired, virtually mute Everyman (played by Wiley Wiggins of “Dazed and Confused”) who floats around, ostensibly dreaming his encounters with people more than willing to bend his ear with their insights.

One spends the first few minutes marveling at, and getting used to, the look of the film, which ushers in a new urban location with each character and features objects and spaces that persist in jostling and wobbling around within the frame.

Humans and inanimate details are sometimes quite realistic, even recognizable (for example, Ethan Hawke and Julie Delpy, the stars of Linklater’s “Before Sunrise,” are immediately identifiable in an engaging bed chat), but the computer “painting” can give subjects forms, movements and dimensions that are wildly exaggerated, limber and stylized in cartoonlike fashion.

Nonexistent “storyline” has the young vagabond arriving by train in a town. Given a ride by a fellow in a curious car-boat, the wanderer encounters a professor type who insists that existentialism has been misunderstood as the religion of despair and hopelessness, whereas it should instead be thought of as the most hopeful of philosophies since it suggests that our destinies are entirely in our own hands. Besides, he adds, Sartre claimed never to have experienced despair in his life.

And so it goes, as the sponge-like Candide absorbs other individuals’ takes on myriad subjects — from evolution, alienation, the media, the commonality of knowledge, the curtailing of freedom in contempo society and corporate slavery to art, acting, levels of awareness, Andre Bazin and, of course, dreaming, which is a persistent motif.

Late in the game, an “illustrated” Steven Soderbergh relates an anecdote about Louis Malle telling Billy Wilder that his new film is like “a dream within a dream,” whereupon Wilder replies, “You’ve just lost two million bucks.”

Given that it’s hard to say, at least on first viewing, how many levels of dreams-within-dreams are supposed to be represented in “Waking Life” (not that it really matters), this could be Linklater’s tacit admission as to the admittedly limited appeal of his own project. At very least, it demonstrates a good sense of humor about it.

The eagerness and earnestness with which the picture addresses its subjects, and the lack of cynicism with which it does so, is something most people don’t encounter in life after college.

For viewers somewhat past that stage, there is something both sweetly nostalgic about the monologues as well as an element that is somewhat wearisome; one can take only so much of this sort of intellectual posturing.

Still, even for those out of academia and not on mind-altering substances whose patience might be slightly tried by all the talk, Linklater has made a highly distinctive, quite original film that distracts the mind and engages the eyes.

It’s difficult to imagine that many subsequent pictures will follow down the trail he and Sabiston blaze here, at least at full feature length. But the technique introduces a new tool and means of expression to mainstream filmmakers that they might use to their advantage when a reason presents itself.

Refreshingly, score is not rock or pop oriented, but an interesting blend of jazz, classical and South American sounds. — Todd McCarthy, Variety