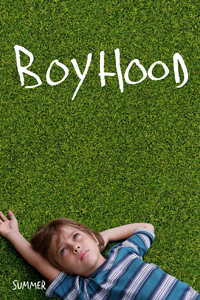 Boyhood -- director Richard Linklater's 12-year portrait of contemporary childhood -- stands as a time-capsule-worthy movie about the kind of fragmented family lives that have become increasingly common.

Linklater's movie may not be flawless, but it's brave and thorough, and it may make you realize just how difficult growing up has become. I don't know if Boyhood describes a new normal, but it's an eminently credible look at the realities that confront an awful lot of today's kids.

The story focuses on Mason, following him from the age of six to the age of 18. Mason's the son of parents who married too early and subsequently divorced. He lives with his mother, who has notably bad judgment when it comes to men, eventually entangling herself in a second marriage to an abusive drunk.

During his young life, Mason is forced to change residences and schools. He must also navigate a relationship with his biological father, a good-hearted guy who hasn't really grown up himself.

Linklater shot his movie in 39 days over the course of 12 years, employing the same cast throughout the entire project. As a result, we get to watch the young people in the movie grow and mature, a process that takes them through stages of cuteness and ungainliness and finally deposits them on the cusp of adulthood.

We feel as if we really know these youngsters, and as they get older, we're constantly looking for traces of the children they once were. We live with these characters.

To his credit, Linklater doesn't fill the movie's 2 1/2 hours with wall-to-wall confrontation. Although there are a couple of tough emotional outbursts, Linklater mostly allows his characters to live their lives unhurriedly, often struggling to do the best they can. In that sense, Boyhood is a movie about the ways in which we learn to live with imperfection, to adjust to it as time passes.

Young Ellar Coltrane provides the glue that holds Boyhood together. He gives the movie a strong center as Mason moves toward young adulthood. Linklater's daughter Lorelei, who plays Mason's older sister, is equally good, although her character doesn't get equal time with Mason. In an early scene, Lorelei Linklater and Coltrane battle in the backseat of a car in ways that will be distressingly familiar to any parent who has lived through similar moments with a contentious set of siblings.

The rest of the cast does strong work, particularly Patricia Arquette as Mom and Hawke as Dad. Marco Perella plays another man in Mom's life, a guy who tries to over-control his kids because he can't control himself. His alcoholism eventually turns mean.

Mom later takes up with an Iraq war vet, another guy who's clueless when it comes to women and kids.

It's fair, I think, to regard Boyhood as a collection of telling moments: a kid watching his parents argue and us knowing that the moment is spring-loaded to have later impact, for example.

Late in the movie, we see Mason's first serious relationship with a girl (Zoe Graham).

As I watched Boyhood, I kept wondering when melodrama would strike, when the dramatic chickens would come home to roost. That never really happens.

Yes, circumstances can be difficult, but the characters muddle on. Some fall by the wayside -- or are pushed. Some grow and prosper. Mom, for example, becomes more independent, although she also sees the hollowness in a life that has left her on her own.

Hawke's character finds a second wife and starts a new family. He puts irresponsibility behind him, and trades his beloved GTO for a minivan.

Throughout, Dad remains in touch with the kids from his first family. A scene in which he takes them to meet his new wife's parents typifies the way Linklater plays against expectations. Grandma and Grandpa are Bible-toting churchgoers, and Grandpa's a gun enthusiast, but they're also people with a natural sense of generosity. When Grandpa (Richard Andrew Jones) gives 15-year-old Mason one of this prized shotguns (his father gave it to him), the moment becomes truly touching.

Shifting cultural references pop up as we go. We get scenes during the height of the Harry Potter craze. Cell phones crop up. Musical tastes evolve. Mason changes hair styles, and eventually dons earrings.

But Linklater seems significantly less interested in shifting styles than in the substance of the lives he's observing.

When Mason begins to mature, he becomes interested in pursuing a career in art photography. It's clear that he's dealing with adolescent confusion, but also that he's smart and sensitive.

Besides, there could be a good side to the emotional distance that Mason learns to maintain, a hint of wariness that should serve him well in a world that's not always waiting for us with open arms.

In its later stages, Boyhood begins to feel like a talk-heavy Linklater movie in the Slacker and Waking Life vein: Characters reveal themselves (or not) through conversational riffs. And the movie overstays its welcome with a prolonged final act.

But taken as a whole, Boyhood represents an impressive achievement, a beautifully observed portrait of contemporary life, rooted in Texas but not confined to the peculiarities of the Lone Star state.

For all of its difficult detours, Boyhood qualifies as an optimistic movie, expressing Linklater's belief that most of us survive, get along and do our best to keep on going. We try.