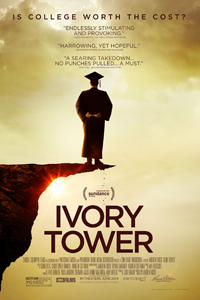 A shocking and disturbing look at higher education in the U.S., "Ivory Tower" does an excellent job exposing the many problems facing universities, and more importantly, students who wish to attend them. Filmmaker Andrew Rossi brings to light the crisis looming for these young people --- asking "Is college worth the cost?"

Anyone who has a child in college, recently graduated or facing the prospect in the future, knows the rising costs involved. Sticker shock is an understatement when kids first begin the process. And with student loan debt surpassing $1 trillion and Congress unwilling to address the issue, more and more people are questioning education's worth vs. cost.

Rossi travels to several institutions, including Harvard University, Arizona State, Deep Springs College in Death Valley, Spelman College in Atlanta and Cooper Union in New York City, among others. With Harvard being a template for many other schools, these places of higher education are in a competition that could foreseeably put them out of business.

It's not enough in our current educational climate to have a superior reputation for academic excellence. Nowadays, campuses must stand out in areas, including research facilities, recreational centers, luxury dorms, dining halls, etc. And in so doing, the costs associated with these kinds of expansions are driving up the cost of education exponentially.

Two of the schools on which Rossi focuses, Deep Springs, an all-male college, and Spelman, historically black and all women, have managed to inspire their students with rigorous study and personal guidance, thus solidifying and enhancing the college experience for their students.

But it is Cooper Union in New York which is most telling about the state of this country's higher education. Founded by Peter Cooper, a 19th Century philanthropist, this college was one of the last to provide a free education to the ones who cannot afford it. However, due to the current administration's unwarranted expansion, it has been announced that even Cooper Union would need to start charging tuition. This provoked a takeover of the president's offices by the students for an unprecedented 65 days.

All of this is very compelling information. As parents of a college senior, David and I can attest to the hugely growing costs of this hopefully four-year process. Unfortunately, as is also well-documented here, those four years often turn into five or six, or not finishing at all.

But all is not lost. Other schools, both large like Stanford and smaller like Bunker Hill Community College in Boston, are promoting technology as a key part of the answer, and are working to develop more online opportunities for lectures and classes. Though this has many professors fearing for their jobs, it is clear that this will, in fact, be the wave of the future.

Rossi showcases and exposes the problems we are facing regarding the future of higher education in a powerful way. "Ivory Tower" is an exceptionally well-balanced foray into the questions and possible answers about how students must evaluate their specific needs for a college education, or explore other avenues to gain the knowledge and experience necessary to compete in today's world.

I must say, I'll be thrilled when our only child is finished. It's a lengthy process fraught with mind-boggling competition and despair --- and also great joy! For us the journey is almost complete, but as "Ivory Tower" so successfully illuminates, these discussions are far from over. — Jeanne Kaplan, Kaplan vs. Kaplan