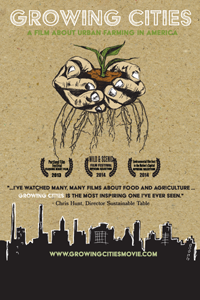 Introduction by Coby Gould, Executive Director of The GrowHaus

Preceded by Tea for Two (U.S., 2013, English, Sinhala, Color, 3:56 minutes). The filmmakers, Daniel Klein and Mirra Fine of the Perennial Plate (a two-time James Beard Award-winning documentary series), came to Sri Lanka with every intention of filming a video about an organic, fair trade tea farmer. That is exactly what they were planning when they set foot on the small tea farm of Piyasena and his wife Ariyawatha. What started as a farm story quickly turned into a story about love and dedication amongst the Ceylon tea fields.

GROWING CITIES is a documentary film that examines the role of urban farming in America and asks how much power it has to revitalize our cities and change the way that we eat. The film follows two friends on their road trip across the country as they meet the people who are challenging the way this country grows and distributes its food—from those growing food in backyards to make ends meet, to educators with the goal of teaching kids to eat better, to activists seeking a meaningful alternative to the industrial food system, and more.

The film explores several urban farms around the US that are committed to sustainable local food and providing jobs to disadvantaged communities. By showcasing innovative ways urban dwellers are producing food, GROWING CITIES aims to inspire people to engage more deeply with their food system—whether that means growing tomatoes in a windowsill or getting a flock of backyard chickens.

A panel discussion that will include Coby Gould and Eric Kornacki, Executive Director and co-founder of Re: Vision International, and Lauren Richardson, Volunteer Coordinator and Greenhouse Manager of Growing Gardens, will follow the screening.