To Kill This Love 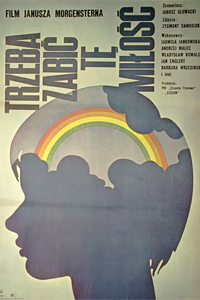 People in love do odd things in the name of it. Sometimes people steal, other times people lie and cheat all in the name of preserving what they feel is love. To Kill This Love explores all of that and more as it explores young love in early 70s Poland.

The story is that of Magda (Jadwiga Jankowska-Cieslak) and Andrej (Andrej Malec), reunited after Andrej has been gone for a time to work. After reuniting, they talk of moving in together so Magda can escape her father and her father’s girlfriend (who is very close to Magda’s age). Both Magda and Andrej were unable to get into university, despite Magda passing her entrance exams. She is to work as an orderly for a year and will then be able to enter surgical school. Andrej seeks work wherever he can find it and ends up sharing an apartment with a friend who always has a signal out that he’s with a girl.

Things seem rather blissful for the couple until they realize they aren’t earning enough for their apartment and won’t have the money for quite a while. Impatient, Andrej begins an affair with his boss’ wife and steals something he thinks is of great worth to sell for some more money towards the apartment.

After eventually being discovered by Magda, she starts casually dating a surgeon in her hospital. She can’t seem to let Andrej go, though and they go into an on again/off again state. Andrej claims it was all done for her, but she feels understandably betrayed.

There is a subplot that involves a man and his dog across the street from Magda’s apartment building. He allows people to take things from his warehouse, where he may just be the resident guard (his relationship to the building is never stated). The dog constantly barks when the men are there, which puts the entire operation at risk of discovery. The man tries to silence the dog, but he gets out of the improvised muzzle, he tries to shoo the dog away but he comes back because he is attached to the man. Finally, the man attempts to kill the dog but that also ends disastrously. This whole subplot seems out of place, until the end when it becomes clear.

There ultimately isn’t much to the surface of Janusz Morgenstern’s film, the story is actually pretty thin. What propels the film and makes the end so devastating is a combination of the actors’ talent in their roles and the way that it universally portrays the idea of young love. Everything in these kids’ lives seems to revolve around each other, but they begin to realize that they need to begin thinking of their own futures. Magda thinks she can’t stand the tragedy of the hospital after carrying a dead child to a gurney for removal to the morgue but reconsiders after being coaxed back by the surgeon that fancies her. She understands that she won’t be able to live the life she wants, with money and free from her father’s apartment, without going to medical school and striking out on her own. Andrej seems to be content to drift aimlessly with Magda’s love to keep him warm and doesn’t think he needs to do anything keep her love and that seeking sex elsewhere is fine as long as he tells himself and Magda that it was all for her.

The leads work hard to keep us interested in the whole film, even the seemingly random scenes between the dog and the middle-aged man. While the film is in progress, this felt like a strange inclusion, almost meaningless. By the end, it was clear to me that the man and his dog was a silent pantomime representing the relationship of Andrej and Magda. At first, they are inseparable and have fun with each other. As things progress and the dog, like Andrej, becomes a nuisance the man tries to get rid of the dog like Magda tries to rid herself of Andrej. This fails as like a dog, Andrej comes loping back to Magda hoping their past will make up for the present. Things come crashing down when Andrej strikes Magda after she refuses to stay with him like the utterly tragic ending for the dog and his man which I cannot bear to repeat here.

Ultimately, To Kill This Love works because it subtly draws you into its simple story and progressively entwines you into the lives of these two kids. You become angry when Andrej is unfaithful the first time and that feeling only increases the more he does it. When Magda discovers them in bed together and the other woman beckons Magda over to the bed to discuss the situation, even giving her a cigarette and making her some tea, you feel Magda’s embarrassment and confusion as she attempts to process everything in the light of really a very kind woman who just wants to talk about it all. There are some genuinely charming scenes that shows Magda happy with both Andrej and the surgeon, showing that she has not let everything destroy her sense of life. Andrej becomes kind of a sad sack, gradually transforming into it from his beginnings as a hyper-confident young man ready to take on the world. He looks defeated by circumstance, something Magda refuses to become.

To Kill This Love works because of the two leads and the energy that Morgenstern films it with. He employs a unique editing style that occasionally gives us a couple of frames from later in the film to give us an indication of what is to come. It’s all so quick that it takes a second after one of these inserts to figure out what just happened, but it ends up being quite useful. He doesn’t use the foreshadowing to telegraph any eventual turmoil, but rather to give us a quick flash so we understand how the current scene fits in with a later one.

The film coasts along with an affable charm that keeps a viewer engaged, then pulls the rug out from under us in the final scenes leaving you speechless and devastated. It’s not manipulative, it’s real. Just as we can sometimes go along in life only to be smacked in the face with a seemingly abrupt tragedy, the ending leaps out at us and leaves us to track the path we just walked so we can understand what just happened.

To Kill This Love