A Will for the Woods 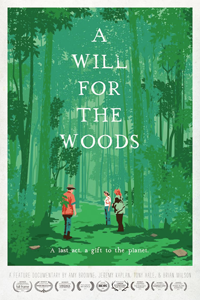 As both an avid genealogist who loves to troll cemeteries and a semi-educated environmentalist hoping to add my small part toward our planet’s survival, I looked at the new documentary “A Will for the Woods” with a cautious eye. I was unaware of the film’s green burial message before its screening at AFI DOCS—in a very slightly edited version that won it two (Audience Feature and Nicholas School Environmental) awards at this year’s Full Frame. The collective entity that bills itself as the film’s directors—Amy Browne, Jeremy Kaplan, Brian Wilson, and Tony Hale—has fashioned a compassionate, personal approach to this subject with the help of Clark Wang, a musician, folk dancer, psychiatrist, and extremely level-headed individual coming to grips with his own struggle with terminal lymphoma. He has an enchanting personality on screen, with a gallows humor that lightens the film’s ultimate tragic flight path.

The film’s focus will push more than a few viewers toward the burgeoning green burial movement, which, in a nutshell, is a environmentally-friendly and less expensive alternative to today’s generally used burial practices. Out with expensive wood or metal coffins. No embalming fluids. No fossil fuels used, as in cremation. In with biodegradable caskets or shrouds. Concrete mausoleums or cemetery plots are replaced with a woodland or park setting with a simple fieldstone as a marker. Sounds like the age of burial enlightenment.

Melbourne-born, New York-based producer Amy Browne spearheaded a school project (ultimately her first feature after three shorts) starting in 2009, learning from her sister of the growing use of alternative burials. Joined by cinematographer Jeremy Kaplan, Amy began her multi-year odyssey with a visit to a funeral convention in Texas. There they met Joe Sehee, the founder and executive director of the Green Burial Council, as he fights David-vs.-Goliath style against the for-profit funeral industry.

Amy and Jeremy soon find their way to Durham, North Carolina, and the film’s incredible “star” Clark and his wife Jane Ezzard, a psychiatric nurse with an infectious laugh, taste for Jimmy Cliff music, and a loving companion throughout the ordeal. As Clark and family play out their lives—privacy be damned-—we watch like a fly on the wall, whether in home movies showing a happy folk dancing couple (their first date!), through his various medical tests and radiation treatments, or his final visits with family in Ann Arbor. There are also talking heads peppered throughout, mostly of Dyanne Matzkevich, a manager and planning specialist at two North Carolina cemeteries who welcomes Clark’s attention and advice on her green burial incentive at Pine Forest Memorial Gardens in Wake Forest.

The film reminds me of Showtime’s sadly ended comedy-drama “The Big C,” where lead actress Laura Linney’s Cathy Jamison character follows a similar path to ultimate death (albeit without any hints of green). Clark’s visit with a woodworker early in “A Will for the Woods,” in which he rests inside a non-toxic, homemade wood coffin, could easily have been part of the droll sensibilities of the TV show. Clark proclaims the box “perfect.” When wondering if he should get a pillow,” he offers “I’ll be here quite a while.” His humor aside, the reality of where he’ll be, as the film winds down its compact 93 minutes, will offer some tear-soaked moments. Interestingly, the rough cut of the film ran nearly 4-hours, pretty funny considering the filmmakers originally intended this as a short subject.

To intertwine Clark’s easygoing, mild-mannered tale (he couldn’t fathom that the ultimate film was centered around him) and provide infotainment on the subject, producer Browne called in director-editors Tony Hale and Brian Wilson to sift through material, a two-year task that would honor both intersecting angles, but could have easily broken down the heart of Browne and Kaplan’s 300 hours of footage. The filmmakers used simple democracy in the end —3 votes were needed to accept a scene. In a Q+A after the first DC screening at the Smithsonian American History Museum’s Warner Theatre, producer Browne related that at a sound mix, their sound editor had told the occasionally quibble-some group, “if there was a pea under 20 mattresses, none of you would get any sleep.” Ultimately it was a group effort of unified feedback and vision.

With more than 40 green burial sites across America, “A Will for the Woods” will help build awareness of the movement while also telling an immersive (for everyone, including the embedded filmmakers), heartwarming tale of one man’s passionate struggle to find both peace on earth and peace in earth.

A Will for the Woods