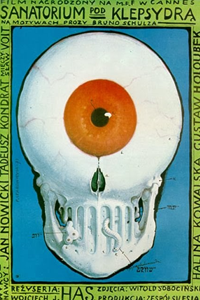 Wojciech Has’ best-known film is still 1965’s The Saragossa Manuscript. But, innovative, stylish and playful as Saragossa is, Has’ true masterpiece remains sorely under-watched. An altogether pacier spectacle, The Hour-Glass Sanatorium is nothing less than an adult Alice in Wonderland.

We follow Joseph, a man in his 30s, into the titular sanatorium to visit his father, where the doctor explains their time-cheating methods of treatment: “Here, your father’s death is yet to occur; in your country, that same death has already struck him.” Wandering the grounds, Joseph begins to encounter a bewildering array of characters. Who are these people who seem to know him? The kid with the stamp album must be his childhood friend; the girl in the nightgown — co-conspirator one minute, traitor the next — the object of his adolescent affections. But why is that red-haired woman talking to him as if he were a young lad? Why are historical battles being fought in our midst, elephant convoys and all? And why do most of the women seem incapable of fastening their tops?

These questions and many more continue to arise, but you’ll be too swept up to ponder each one for long. Like The Saragossa Manuscript, Hour-Glass is an exploration of waking and dreaming, without the relief of an objective eye to distance the trip. Unlike Saragossa, however, it was shot in colour, and few directors have made better use of the stuff than Has. From the lagoon-like deep blues and greens of the sanatorium itself to the visual feast of indelibly creepy clockwork historical figures, exotic birds (both real and humans in costume) and ancient prophets, it’s a sensory, evocative ride throughout.

The Hour-Glass Sanatorium is often misreported to be based on a short story by another homegrown literary master, Bruno Schulz — which does both parties a disservice. Sanatorium Under the Sign of the Hourglass (as it’s usually translated) was the much-loved Polish-Jewish author’s second and final major work, published in 1937: a collection of stories that took us deeper still into the quietly wondrous fictional world he'd established in his first, The Street of Crocodiles. The film is not so much ‘based on’ as ‘drawn from’ various Schulz tales, and strikes an equally original note of its own. John Updike’s formula applies equally to Has’ film: “Schulz presents an antic, soluble, picturesque cosmos, lavish in its intentions but feeble in its authority.” It’s easy to see why they complement each other so well: Schulz presents peculiar, first-person takes on his own small-town life, in which each moment is dilated with the ineffable power found in (to him) holy pulp novels or numinous Spring evenings; Has uses Schulz’s crepuscular title story as a door through which to tumble, taking in the fantastical flights that characterise his other tales as he falls. Tropes and characters — the stamp collection as a charged connection to a larger world; the half-mad father spouting singular philosophy to his customers; the loft filled with exotic birds, dead and alive — are all refracted through the director’s mind’s eye.

To give you an idea of the film’s freefall approach to the source material: one of Schulz’s stories finds Adela the housekeeper — in the book, a lightly sketched if voluble character; in the film, lascivious and downright bonkers — berating the father for inviting the local fire brigade to stay in their house and abuse her hospitality. Has has her deliver complaints about these unwelcome visitors to Joseph while laughing and slapping her naked body, as the latter admires himself modelling the fireman’s helmet he’ll continue to wear throughout much of the (unrelated) madness that follows — which includes the discovery, underneath a bed, of a fireman eating rose preserve with a spoon because he’s finished last of the raspberry cordial. This playfulness also brings us a carnivalesque depiction of pre-war Jewish shtetl life, which lends the film a paradoxical gravitas: the fact that such leaps of time and logic are necessary to recover this world reminds us of the evil that put an end to it.

This is a deeply intelligent — as distinct from ‘clever’ — film. The cumulative effect of Has’ singular mode of storytelling is as strongly emotional as it is sensational: imagine watching another person’s life flash before your eyes. Everything in his Sanatorium is coloured by the attendant melancholies, amazements and complexities of adult experience. In its world you’ve a direct, experiential link to everything that’s ever happened; you can stay with it or move away at leisure, but it’s always going to be there for you. This is, of course, a seductive consolation for anyone who’s experienced loss; the principal danger with watching The Hour-Glass Sanatorium is that by the end you’ll never want to leave.