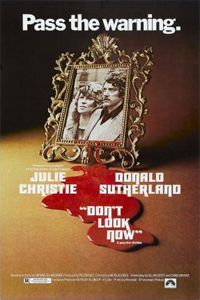 This is a film of deep terrors and troubling insights--one that works a spell of continual, mounting anxiety. It concerns the supernatural and has an eerie, dreadful power, but it is not simply a scare show; it is in the tradition of The Turn of the Screw, not The Exorcist. Don't Look Now uses the occult and the inexplicable as Henry James did: to penetrate the subconscious, to materialize phantoms from the psyche.

Director Roeg, formerly a cameraman (Petulia) has made two previous films: Performance, which he co-directed, and Walkabout. Both had a disquieting beauty, a dreamlike sense of dislocation and, most of all, a reliance on the visual vocabulary of the cinema to build and sustain the narrative. Don't Look Now is Roeg's best work so far --the most deliberate and contained. Much of the movie's power comes from images that carry a kind of glancing, indefinable threat and remain in some dark corner of the imagination. They are immediate but not quite real, like Pinter's language or a Bergman scene.

The film is being billed as "Daphne Du Maurier's Don't Look Now," but a reading of the Du Maurier story from which the adaptation has been made makes one appreciate Roeg and Screenwriters Scott and Bryant all the more. Film and story share certain basic elements of plot and an ending of cruel surprise. The story is detached, almost cursory. Roeg and his collaborators have constructed an intricate, intense speculation about levels of perception and reality. Thanks also to the superb performances of Donald Sutherland and Julie Christie, Don't Look Now has in abundance what most other excursions into the supernatural lack: rigorous psychological truth and an emotional timbre that is persuasive.

Sutherland and Christie play a married couple, John and Laura Baxter, whose daughter has recently drowned in a pond on their country property. Leaving their surviving son in school, the Baxters depart for Venice, where John is restoring a 16th century church. The movie gives a compelling sense of the city not as a romantic tourist spot, but as a cold, purgatorial place, a labyrinth full of mute threat. It is, as one character describes it, "like a city in aspic at a dinner party where all the guests are dead and gone."

The Baxters meet two sisters, one of whom is blind and psychic. The sisters (well played by Hilary Mason and Clelia Matania) reassure the couple of the happiness of their dead daughter. But they sense danger, too. They tell Baxter that his life is in peril while he remains in Venice. He does not believe them, but he is bothered by strange presentiments, and by the persistent reappearance of a small figure in a hooded red raincoat--the garment his daughter was wearing when she drowned.

Roeg has made this darting figure in red into an embodiment of Baxter's guilt over his daughter's death. Reinforced by Pino Donnagio's fine score, Roeg creates a world where everything seems to have a repercussion. He has composed the film with a series of interrelated visual metaphors--glass breaking under a bike wheel, tiles being crushed under a shoe. He also heightens the suspense by stressing the idea of simultaneity: as simple as a window being closed and a door blowing open, or as complex as water being spilled onto a color slide, making the red dye run, and a little girl in a red raincoat sinking into a pond. Every shot and image is like a tile in the mosaic of the church under restoration. Each fits together, forming at last a picture already prescribed, perhaps fated.

Don't Look Now is such a rich, complex and subtle experience that it demands more than one viewing. Roeg's insistence on the power of the image, his reliance on techniques of narrative that are peculiarly cinematic, remind us how undemanding and perfunctory so many movies still are. Roeg's is one of those rare talents that can effect a new way of seeing.