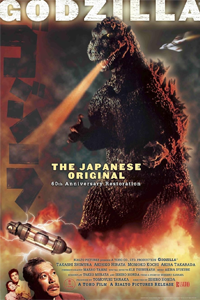 Everything you have heard about Godzilla is true. Yes, it's a cheezy monster movie with a guy in a rubber suit. Yes the special effects are laughable. And yes, it's also a surprisingly mature cultural response to the nuclear nightmare of its time.

If you have seen Godzilla and it starred Raymond Burr, then what you actually saw was an Americanized version called Godzilla: King of the Monsters!, which was cut by 20 minutes, rearranged into flashbacks, and edited -- badly -- to look like Burr was there in Japan.

The original 1954 version -- a 35mm print has been restored and will show for one week only at Starz Filmcenter -- is told chronologically. Fishing boats disappear. Giant radioactive footprints are spotted. Finally, Godzilla makes his appearance, frightening a small fishing village before making his way to Tokyo.

The humans, meanwhile, are trying to figure out why this is happening and what they can do about it. The why, they surmise, is that recent H-bomb tests in the waters near Godzilla's lair, disturbed his habitat and woke this sleeping giant. There are many theories about what might stop Godzilla: electricity, military might, even virgin sacrifices. But one scientist has developed something even more horrific than an H-bomb, called an oxygen destroyer.

The weapon's creator wrestles with his conscience about using this new superweapon. He knows it could defeat Godzilla, but if the world learned of its terrible power, all of humanity could be destroyed. One can clearly see the cultural neurosis of having lived through two nuclear attacks.

There is actually quite a bit of character development, and the wonderful actor Takashi Shimura (Ikiru, Rashomon) lends the film a touch of class. But at its heart, Godzilla is all about the monster and, beneath the surface, Japan's post-nuclear stress disorder.