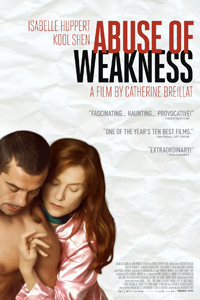 Catherine Breillat's most notorious films — "Romance" and "Anatomy of Hell" among them — investigate the power struggles between men and women.

"Abuse of Weakness" opens with a remarkable scene of Maud (Isabelle Huppert) in bed. Her delicate, pale body is enveloped in a big white comforter. As she feels her arm "dying," the naked Maud rises, falls over, and ends up in the hospital. Watching Huppert in recovery contorting her face as her left hand, balled into a fist, shakes, viewers can feel her pain and suffering. Maud engenders nothing but sympathy as she struggles with physical and speech therapy, admitting, "I've sunk like the Titanic."

This 12-minute prelude to the central drama that comprises "Abuse of Weakness" is meant to emphasize Maud's diminished capacity. It is the reason — not the excuse — to explain why she's taken (and taken in) by Vilko Piran (French rapper Kool Shen). Admiring his "icy hangdog looks" on TV, where he admits to being a crook that preys on the vanity of the rich, Maud proclaims, "I want him."

As Breillat's film painstakingly shows, Vilko will cause Maud another setback — one that may be more emotionally destabilizing than the stroke that befell her.

There is, indeed, something incredibly sexy and alluring about the tough criminal. During their first meeting, where Maud offers him a role in a film she plans to make, Vilko climbs up her bookcase both in curiosity about her collection and to show off. The way these two characters size up each other in this scene is delicious: Maud is inspired by Vilko, and Vilko gets what he wants.

Breillat uses this scene to establish the co-dependent relationship that develops between them and forms the heart of her provocative film. Vilko fascinates Maud, and they have a series of charming/annoying exchanges over the phone. However, when friends and family members express their concerns about him, Maud ignores these warnings. Perhaps this is because Vilko pledges that he will always be there for her. When he prompts Maud to write a large check to help him out financially, she insists it is a loan. When she writes a second check for Vilko, his predatory eyes shift back and forth, greedily, cueing viewers that he is a cheetah and she is his prey.

"Abuse of Weakness" spends considerable time  — almost too much — depicting Vilko's financial milking of Maud. He is seen insidiously manipulating her when he bounces a check, punishing her when he does not get his way (i.e., money), or telling her that he will be imprisoned if she does not give him more cash. That he often uses the phrase "if the cops ask" when she cuts him a check should give her pause. Breillat makes viewers feel paralyzed as Maud makes a series of bad decisions, even signing checks with a bandaged hand. The film builds its suspense by showing how far Maud will go before she comes to her senses.

Significantly, the scenes in which Vilko takes advantage of Maude are contrasted with moments that find her vulnerable and alone. Two episodes that are particularly painful to watch include one where she struggles while eating a meal, and another where she falls after a shopping trip. Breillat shrewdly films the later sequence from overhead, underscoring the impact of her condition as she kicks the wall, calling for help.

Huppert gives a virtuoso performance here — not only because she deftly meets the extreme physical challenges of her role, but by playing Maud with unabashed humor and heart. Laughing often and self-deprecating in her non-sexual schoolgirl attraction to Vilko — she rebukes his attempt at a kiss — Huppert makes Maud compassionate, especially when she is being conned. Moreover, Breillant and Huppert never allow for condescension.

"Abuse of Weakness" gets a bit weary in the last act, where Vilko moves in with Maud and the stresses they face — she is now broke, and he becomes more desperate, more demanding — force them to confront the cracks in their relationship. The cool tone Breillat takes to telling her story makes this part of the drama less engaging than the seduction the came before it.

Yet Breillat closes her film not with a satisfying lawsuit that mirrors the one from real life (Rocancourt was convicted of "abuse of weakness" and sentenced to prison) but with a stunning scene in which Maud explains her behavior to concerned family members. Her response is as staggering as the film.