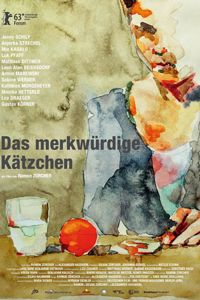 Ramon Zürcher’s miniature debut, The Strange Little Cat, is one of the most confident and unusual first features in recent memory. It’s also one of the most aptly titled; its perspective—intimate, but removed, and often as intrigued by what’s just off-camera as by the action on-screen—seems ineffably feline. Organized around oblique and sometimes mismatched angles, with every composition suggesting a torn-off piece of some larger map, the movie invests its cramped setting—a middle-class Berlin apartment, seen over the course of an afternoon and evening—with suspense, absurdist humor, and a wholly authentic sense of hectic, disorderly family life. Writer-director-editor-sound-designer Zürcher is a rigorous formalist with a light, humane touch—a seeming contradiction in terms, though fitting for the director of such a paradoxical little movie.

Calling The Strange Little Cat a domestic drama would be a disservice, since its main dramatic through-line—involving an unnamed mother (Jenny Schily) whose uneasiness hints at mental turmoil—is easily its least compelling aspect. Sure, there are plots and subplots, plenty of characters, and even a couple of flashbacks and monologues. (One, in which the mother’s story of having a stranger accidentally brush up against her is illustrated by a close-up of her face during the experience, is an object lesson in how a little suggestion can go a long way.) But the effect of the movie has less to do with how any of these elements are developed or revealed, and more with how they add up.

The Strange Little Cat creates an immersive sense of domestic life by placing as much as possible out of the frame. Take, for instance, the way Zürcher introduces eldest daughter, Karin (Anjorka Strechel), in the movie’s opening scene—as an off-camera voice asking, nonchalantly, “Is Clara nuts?” It’s not just that the viewer doesn’t know who Clara is at this point; it’s that nothing has previously clued them in to Karin’s presence in the scene. Taken out of context, family talk turns into intriguing non sequitur. Characters—their faces often framed out—bump up against each other and squeeze past Ikea furniture. Whenever someone turns on the coffee grinder, the little girl later revealed to be Clara (Mia Kasalo) screams at the top of her lungs. It’s occasionally confusing, but never confounding; what the movie does, in its peculiar feline way, is restore a sense of mystery, long-lost, to scenes of ordinary life.

Movies work, in part, by alternately capturing and inventing reality. The medium has a power—too rarely tapped nowadays—to make the ordinary seem more interesting or meaningful than it really is, imbuing commonplace objects and interactions with suspense. That’s exactly what The Strange Little Cat accomplishes in its best moments. The result is entrancing.