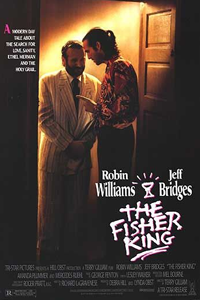 You can watch only 10 minutes of The Fisher King and spot it as the work of Terry Gilliam: he leaves his eccentric stylistic footprints on every frame. Gilliam's audaciousness, his visual brilliance have never been in doubt. But his movies"Time Bandits," "Brazil," "The Adventures of Baron Munchausen"-can leave you feeling worn out and overstuffed. "The Fisher King" is different. Starring Jeff Bridges and Robin Williams, it's his first real Hollywood movie. It's also the first time Gilliam's directed a script he didn't conceive himself And though his dark, prankish satirical vision pervades this story, at the end of this sometimes harrowing tunnel is a glowing romantic light. Working within the constraints of a big studio film has brought out Gilliam's best: he's become a true storyteller and a wonderful director of actors. This time he delights not only the eye but the soul.

"The Fisher King" is a wild, vital stew of a movie, an attempt to translate the myth of the Holy Grail to the harsh urban realities of contemporary New York. Bridges plays Jack Lucas, an arrogant, narcissistic talk radio deejay whose cynical rap inspires a psycho to a random act of mass murder. Crushed by guilt, on the verge of suicide, he's rescued by a lunatic-the homeless Parry (Williams), a Quixote-like vagabond who fancies himself a knight on a medieval quest. In reality, Parry is a former college professor driven mad with grief-. his wife, it turns out, was one of the victims of the psycho's shooting spree. Parry is convinced the Grail resides in a rich man's Fifth Avenue fortress, and voices have told him that Lucas is the man who can get the Grail. Now this is the kind of dangerously high-wire concept that could easily have turned into an embarrassment. Gilliam makes it sing.

The theme of Richard LaGravenese's rich, quirky script is redemption. Lucas thinks he can atone for his sins by helping the homeless man find his romantic ideal-a skittish, unhappy accountant (Amanda Plummer). As in any fairy tale, there are many obstacles in the hero's path before his soul can be restored. "The Fisher King" veers with great assurance from wild comedy to feverish fantasy, robust romanticism and tough realism--with only an occasional stumble. Lucas's relationship with a sassy, long-suffering video-store owner (Mercedes Ruehl) is observed with stinging accuracy. And the whimsy of Parry's delusions is tempered with pain-he's retreated into fantasy from the horror of his life.

As one might expect in a Gilliam movie, the design (by Mel Bourne) of the film is dazzling; New York has been uncannily reimagined as a medieval city. What's more surprising is the passionate conviction of the performances, which includes a bravura turn by Michael Jeter as a homeless gay cabaret singer who stops the show belting "Gypsy" songs in drag. Williams puts all his mercurial comic brilliance in the service of his character (well, almost all). The fiery, funny Ruehl and the neurotic, wonderfully gawky Plummer create indelible characters. But it's Bridges who holds the whole thing together. His subtle, corrosive performance encompasses the movie's extravagant range of tones-from the wormy taste of fear and loathing to the grand chivalric gesture. — David Ansen, Newsweek