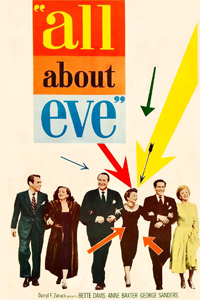 "Fasten your seatbelts, it's going to be a bumpy night!", and with the acerbic talents of multi-Oscar-winning writer/director Joseph L Mankiewicz and his magnificent cast - the superb Bette Davis (replacing, thankfully, an ailing Claudette Colbert), the acid-tongued George Sanders, Celeste Holm, Thelma Ritter, Marilyn Monroe - it certainly is. On its original release, this tale about rivalries in the theatre was criticised in some quarters for being over-wordy and relentlessly arch, though today's audiences tend to revel in its wit and cynicism. The dialogue is especially clever and the performances are first-rate. If the framing flashback structure seems a little contrived, or if Anne Baxter's Eve doesn't quite have the killer instinct required for the role, these are minor blemishes in a classic movie, whose qualities remind us that there once was a Hollywood where such sophisticated treats could be made.

Oscar-winning drama starring Bette Davis, Anne Baxter and George Sanders. Margo Channing is an ageing theatre actress charmed into employing a seemingly innocent young fan as her secretary. But her new assistant is not as naive as she appears and ruthlessly begins to undermine Margo's career in order to fulfil her own acting ambitions.