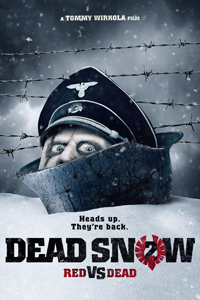 When Dead Snow released its blood-soaked Nazis on Norwegians and the world in 2009, nobody quite knew what to expect. Scandinavia had not yet produced a fully grown splatter movie, but Dead Snow made enough splash to make a sequel inevitable. The first movie also made sure that director Tommy Wirkola could launch a Hollywood career, which in turn led to better funding of the sequel. Wirkola promised that the sequel would be bigger and better, and nobody can hold that promise against him now!

Martin was the only survivor of the 2009 Nazi zombie attack, and the sequel starts exactly where the first movie ended, with Martin escaping the zombies. He is now wanted by the police, but Martin’s biggest problem is not the stupid lawmen; he discovers that the zombies are still on their way, heading for a small town that were part of their orignal WW2 mission. Unable to stop the growing zombie army by himself, he enlists the help of the Zombie Sqaud, an American trio of nerds and geeks with special training  for situations like this. They are not enough, of course, so Martin finds out how he can dig up more help. Literally!

Expectations have been high for Dead Snow 2, not only because the first movie was an unexpected hit, but also because Wirkola has been building an impressive resumé and been very confident about his work. He is a movie geek, a Norwegian Tarantino, and that shows in all of his films, including this one. The comparison to Tarantino isn’t just about passion either; if you thinkKill Bill or Django Unchained were violent, they are Sunday school stage drama compared to Dead Snow 2. For example, Martin is covered in blood in all but 7 minutes of the film. Of course, splatter movies need to be extreme by nature, and this film delivers, and could be called a Norwegian Brain Dead in terms of blood, gore, intestines and shock effects. There’s even a scalp-tear scene, similar to the face-rip in Peter Jackson’s classic. Skulls are crushed, throats are ripped, bowels are gutted! Most of it takes place in daylight, so every detail can be seen. Dead Snow 2 isn’t subtle, but unlike other movies with focus on gore, Wither for example, the Dead Snow 2 goes for gross-out laughs. Where the said Swedish film takes itself seriously, Dead Snow 2 is one huge € 4.3 million slit tongue placed firmly in every rotten cheek!

The story is fortunately not only peppered with mutilation. To flesh things out, we get the backstory on Herzog, the commanding Nazi zombie; why he’s in Norway, what his mission is, and what drives him. It doesn’t really make him more sympathetic like backstories sometimes do, but it does make the story richer, and more credible than if Martin were just attacked by Herzog again. He is a better drawn Zombie Führer now, not just a monster from below the ground. As a bonus, you don’t even have to have seen the first film to understand the sequel. Flashbacks reintroduce a summary of the first film; not that we have forgotten it, but it’s always better to get some of the key images again, in stead of lazy exposition.

Traditionally, the zombie film genre has a few conventions; zombies must eat brains, they walk slowly, and cannot speak. Lately, these rules have been broken more often than not, and Dead Snow 2 honours few of the archetypical definitions of zombies. In stead, the film relies on its own inventions, which are used in the film both for genre broadening and as integral parts of the story. In fact, the movie would have been very short had it not been for two new premises that Wirkola introduce. Since we’re talking about Nazi zombies here, and the Nazis were known for their interest in the occult, the first invention works without hesitation. It also evades the usual infection / virus story. This particular invention is actually used by both sides of the battle.

The second invention (check the gray square below the review if you want to read these spoliers) is about creating a new breed of zombies. In itself, redefining the zombie is not innovative anymore, but in this film it’s not just about giving them some new ability. Let’s just say that the subtitle for the movie could have been Army of the dead. With these two new variables, the movie is certainly more unpredictable than it would have been with more classic zombies. You can no longer depend on your old zombie knowledge to predict the outcome of the war.

Tommy Wirkola is an effective director; he is never fuzzing around and seems to have put all of the budget increase visibly on the screen. The core cast is about the same size as in the first movie, but there are lots of extras this time, most of them dressed as zombies, or just laying dead with body fluids colouring the ground. The WW2 Tiger tank is used as a big, fun toy too; it ups the action level from zombies beating the hell out of eachother to more mechanical mayhem. On the other hand, the technical quality of the zombie make-up is not what you get from productions worked on by masters such as Greg Nicotero or Tom Savini. The masks look a bit stale and not as slimey and hollow as the most expensive zombies, but you have to remember that the frozen ground of Northern Norway preserves corpses! In stead of the best make-up effects ever, the film puts its money on being written as a war movie, with attack strategies, troops, sieges and battles. That’s also why the Tiger tank fits into the story; it is not just a big weapon, it is synchronized to the story and overall theme of the film.

The only major quibble I have with the movie, is in fact one of the important plot hooks. Mentioned from the start of the project, the Zombie Squad was supposed to add an international touch to the movie. The squad (which is actually a “real organization” that lended their support to the film) was even supposed to be played by “well known names”. I had to look them up, and their presence did not add much either. The fact that they are Americans add nothing to the story (it only makes the film slightly more marketable in the US), and frankly, the squad does not do anything that a few loco locals could not have done. They arm themselves with common hardware store items, walk around with a bored expression on their faces, and keep refering to Star Warsall the time. If you want to add some nerdy references, there are cultier movies out there to pay tribute to (Evil Dead is all over the film, but a bit more subtle). The Zombie Squad is nothing but a major misfire and a blown opportunity. About every other character are oddball weirdos, and I am sure the film’s overall comedy would have been much more juicy if a group of Talvik’s toughest had teamed up with moonshine grenades. Why this part of the movie was not rewritten is almost uncomprehensible, as the rest of the film sprays non-stop action, comedy and gore on a high level. Some other characters are not that well developed either, but they are not key to the story.

The disappointment of the Zombie Squad is made good by Vegar Hoel as the hero, Martin. While Martin is a cartoon character like everyone else in the movie, he ranges from desperation to determination, from fear to guilt and from nervous to cool in every scene. It’s a delight to see him deliver lines, faces or moves in perfect synch with the subject matter. Very few Norwegian actors could have pulled this off under such physical circumstances; most of them are classicaly trained stage actors with either too little distance to their work or too much self respect. On top of that, Hoel fits the role of a hero. He’s no square-jawed Bruce Campbell, but he can definitely be trusted.

Unlike Tarantino, Wirkola is not trying to make cinematic art. He’s just out to have fun, the kind of fun you want to watch when buddies are gathered to drink beer and munch popcorn. Dead Snow 2 is a party film that knows its place in cinema, perfectly capturing that cool B-movie feeling that quality trash films should have. At the same time, it never tries to be scary. It’s not that kind of horror film, just like The Exorcist never tries to make you laugh. The red stuff is outrageously silly and the massacres are slapstick symphonies in a movie which is a study of absurdities more than anything else. If you like your horror dark and threatening, look elsewhere. That doesn’t mean there are no interesting aspects of Dead Snow 2 beyond the blood, but mainly it is a goofball splatter fest that pushes some boundaries; this film is Scandinavia’s second mainstream gore film, and as expected, it changes the map of Nordic cinema in a way that only the original Dead Snow touches. Dead Snow 2 is here to prove that there is no such thing as “too much” in splatter movies, as it makes a bloody mess of newborn babies, children, the gay, the disabled and the old, and throws in some necrophilia for good measure. Nothing that horror fans have not seen before (not sure about exploding infants, though) but in concept and in execution Dead Snow 2 is up there with the best!