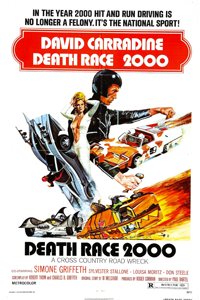 If I were to say to you, a propos of nothing, "the most trenchant satire of American bloodlust and broken-down media culture of the 1970s was produced by Roger Corman," would you believe me? Don't bother answering, because I refuse to believe anybody would; I'm the biggest Corman fan I know personally, and I was still taken completely by surprise by Death Race 2000 the first time I saw it. For it very possibly isthe most trenchant satire &c., that I have seen anyway (and there are, of course, many satires I have yet to encounter), in the most surprising and delightful way conceivable. Though when we glance into the future - but not so far as the immeasurably far-flung year 2000 - and find that the film's director, Paul Bartel, would later oversee Eating Raoul, it becomes at least a little bit less surprising and much easier to believe that this mix of grimy genre fare with sociological insight could exist.

There is nothing in the movie actually called a death race; the title refers to the Trans-Continental Road Race, the most popular sporting event in the United Provinces of America of the year 2000, the 20th anniversary of the race that was begun as an attempt by the government to keep the population calmed down after the collapse of the American economy in 1979. That government, dominated by the Bipartisan Party and ruled from a Beijing office by Mr. President (Sandy McCallum), has spent the entirety of the intervening decades using its iron grip on the media and the collective imagination of the population to assure the populace that no, things aren't actually terrible at all, and the Trans-Continental is the shiniest bauble he has to distract the masses. But a certain group of rebels, led by the geriatric Thomasina Paine (Harriet Medin), is hoping to prevent this year's race through sabotage and terror tactics, to reveal to the population just how morally bankrupt the race, the the Bipartisan Party that presents it, really are.

For the Trans-Continental isn't just a race, but an officially sanctioned killing spree, in which participants are accorded points for all the passers-by they're able to mow down in their heavily modified muscle cars, to the giddy delight of all those fans and the vacuous commentators through whom the government's preferred reality is doled out to said fans. And not only is the race deadly to bystanders, it has a pretty high death rate for the participants, such that the colossal fan favorite Frankenstein (David Carradine) and his close rival Machine-Gun Joe Viterbo (Sylvester Stallone, honestly great) are the only winners in the 20-year history of the race still alive. They're the headliners of this year's edition, alongside Calamity Jane (Mary Woronov), Matilda the Hun (Roberta Collins), and Nero the Hero (Martin Kove), whose names reflect their chosen themes, this being after all a broad spectacle and it requiring colorful characters to really sell the bloody sport; and that's how we have a cowgirl racing a '20s-style gangster racing a neo-Nazi.

It doesn't take a degree in media studies to see what's going on here: not with character names like Grace Pander (Joyce Jameson) for the most thoroughly breathless and uncritical and all-around smarmy of the commentators. It's a fairly savage and incredibly funny parody of American pop culture as it existed circa 1975, when the movie was released, and no less in 2013, when the same basic societal ills the movie describes have hardly abated: real-life violence as entertainment, a media that is more than thrilled to do its part to distort the truth for whatever meager amount of influence it can thus acquire, a government that operates largely on the basis of distracting its populace rather than providing for them. It's a message that pertains from everything to thepanem et circenses of Imperial Rome (as represented by Nero the Hero - in fact, all of the racers explicitly represent a culture where people were kept distracted by violence-as-entertainment) to the Panem of The Hunger Games, and it is applied to the America in which Bartel and screenwriters Robert Thom and Charles B. Griffith (largely reworking a short story by Ib Melchior) were all living with particularly entertaining didacticism; its satire is as much funny as it is probing, and thus goes down far easier than it might seem on paper.

Death Race 2000 is, after all, a Roger Corman production, through his New World Pictures, and he was first and always keenly aware of how to keep the audience entertained. For all its unmissable and hugely successful social commentary, the movie is first and above all an action picture about racers in garish custom cars speeding through a Southern California landscape that does a tolerable job of standing in for the entirety of the United States, murdering people in comically bloody spurts, and stopping off as needed to allow most of the named females in the cast to remove their clothing for a scene or two (hard to say if it's thus hypocritical, or if it actually manages to have its cake and eat it). Satire it may be, but satire does not win out over exploitation, and the film is pretty terrific in that regard too, with Corman's legendary ability to stretch a dollar being used to grand effect in making a version of the future that looks hugely cheap but utterly fun at the same time, and even to a certain degree reflects back on the hollowness of the society it's depicting.

The action isn't staged as inventively as in the film's spiritual successor, Mad Max, because nothing could be, but given the limited means at their disposal, the filmmakers keep the intensity of the thing high, using only a very few number of obvious tricks (there's a lot of visibly sped-up footage) to put the thing over, and as filmed by the deeply unappreciated Tak Fujimoto, the whole affair has some really sharp exterior photography that gives the film an unexpected realistic weight, given the cartoon designs, cartoon situations, cartoon characters, and cartoon blood. '70 film stock might not have been good for much, but it was just plain aces for a certain kind of gritty, documentary-style cheap filmmaking.

It's an unabashedly cheap, carefree B-movie, coming in at a compact 79 minutes in which something is nearly always happening; it's deliriously fun on the most degraded, lowest terms you could name, and equally canny and smart on the most refined, intellectual level, and always without adopting a sense of ironic detachment from its own plot. It's brilliant and brilliantly trashy, while being wholly, addictively fun to watch. If I can't quite bring myself to call it "perfect", that's only because the whole affair is so pointedly disreputable, but it really is a movie that has a little bit of everything, and it's easily the best version of itself that could possibly be put together. — Tim, Antagony & Ecstasy