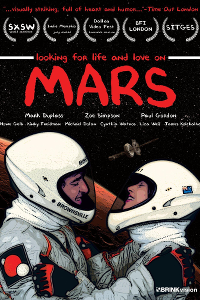 Beginning with accidentally sprayed Russian mucus and ending with deliberately deployed American urine, the plot of “Mars” owes at least as much to bodily fluids as it does to science fiction. Low key, low budget and low energy, this animated space odyssey from the writer and director Geoff Marslett accompanies three mismatched astronauts to the red planet and the search for new life forms.

Constantly monitored by Shep (Howe Gelb) at Mission Control and a pair of perky television journalists (Liza Weil and James Kochalka), the astronauts bicker and bond. Charlie (Mark Duplass), a cocky celebrity famous for a long-ago space walk, spends most of his time bedazzling his standard-issue jumpsuit. Casey (Zoe Simpson), a gung-ho New Zealand doctor, dreams of being the first person on Mars. Meanwhile their leader, Hank (Paul Gordon), nursing a perpetually stoned affect, works on developing a personality.

Employing his own version of the rotoscoping technology used in films like “Waking Life” and “A Scanner Darkly,” Mr. Marslett (who teaches animation at the University of Texas at Austin) keeps the politics to a minimum and aims his best jokes at space-race rivalries. Maintaining an amiable and innocently awed tone, he minds his science more than his fiction, delivering a listless romance upstaged by a cute robot, dancing aliens and Kinky Friedman as a Johnny Cash-style president of the United States. At least in space no one can hear you urinate.