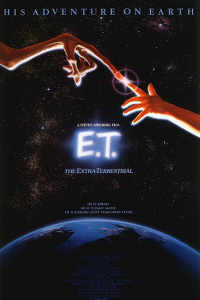 This movie made my heart glad. It is filled with innocence, hope, and good cheer. It is also wickedly funny and exciting as hell. "E.T. The Extra-Terrestrial" is a movie like "The Wizard of Oz," that you can grow up with and grow old with, and it won't let you down. It tells a story about friendship and love. Some people are a little baffled when they hear it described: It's about a relationship between a little boy and a creature from outer space that becomes his best friend. That makes it sound like a cross between "The Thing" and "National Velvet." It works as science fiction, it's sometimes as scary as a monster movie, and at the end, when the lights go up, there's not a dry eye in the house.

The Great Movies Read Ebert's essay on what makes "E.T." one of the great movies. "E.T." is a movie of surprises, and I will not spoil any of them for you. But I can suggest some of the film's wonders. The movie takes place in and around a big American suburban development. The split-level houses march up and down the curved drives, carved out of hills that turn into forest a few blocks beyond the backyard. In this forest one night, a spaceship lands, and queer-looking little creatures hobble out of it and go snuffling through the night, looking for plant specimens, I guess. Humans arrive-authorities with flashlights and big stomping boots. They close in on the spaceship, and it is forced to take off and abandon one of its crew members. This forlorn little creature, the E.T. of the title, is left behind on Earth--abandoned to a horrendous world of dogs, raccoons, automobile exhausts and curious little boys.

The movie's hero is one particular little boy named Elliott. He is played by Henry Thomas in what has to be the best little boy performance I've ever seen in an American film. He doesn't come across as an overcoached professional kid; he's natural, defiant, easily touched, conniving, brave and childlike. He just knows there's something living out there in the backyard, and he sits up all night with his flashlight, trying to coax the creature out of hiding with a nearly irresistible bait: Reese's Pieces. The creature, which looks a little like Snoopy but is very, very wise, approaches the boy. They become friends. The E.T. moves into the house, and the center section of the film is an endless invention on the theme of an extra-terrestrial's introduction to bedrooms, televisions, telephones, refrigerators and six-packs of beer. The creature has the powers of telepathy and telekinesis, and one of the ways it communicates is to share its emotions with Elliott. That's how Elliott knows that the E.T. wants to go home.

And from here on out, I'd better not describe what happens. Let me just say that the movie has moments of sheer ingenuity, moments of high comedy, some scary moments and a very sad sequence that has everybody blowing their noses.

What is especially wonderful about all of those moments is that Steven Spielberg, who made this film, creates them out of legitimate and fascinating plot developments. At every moment from its beginning to its end, "E.T." is really about something. The story is quite a narrative accomplishment. It reveals facts about the E.T.'s nature; it develops the personalities of Elliott, his mother, brother and sister; it involves the federal space agencies; it touches on extra-terrestrial medicine, biology and communication, and still it inspires genuine laughter and tears.

A lot of those achievements rest on the very peculiar shoulders of the E.T. itself. With its odd little walk, its high-pitched squeals of surprise, its tentative imitations of human speech, and its catlike but definitely alien purring, E.T. becomes one of the most intriguing fictional creatures I've ever seen on a screen. The E.T. is a triumph of special effects, certainly; the craftsmen who made this little being have extended the boundaries of their art. But it's also a triumph of imagination, because the filmmakers had to imagine E.T., had to see through its eyes, hear with its ears, and experience this world of ours through its utterly alien experience in order to make a creature so absolutely convincing. The word for what they exercised is empathy.

"E.T. The Extra-Terrestrial" is a reminder of what movies are for. Most movies are not for any one thing, of course. Some are to make us think, some to make us feel, some to take us away from our problems, some to help us examine them. What is enchanting about "E.T." is that, in some measure, it does all of those things.