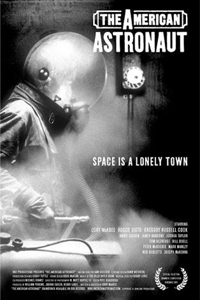 This free event is made possible by Space Month: Our Space. Our Future.

Opening with a mordant prologue that reminds of the expressionless absurdist sensibility of the late Douglas Adams and proceeding through something somewhere between Six-String Samurai and Dead Man (but a science-fiction musical), Cory McAbee's The American Astronaut is dead brilliant.

Demonstrating a truly dazzling level of technical proficiency (despite or due to what must have been a non-budget) and a breathless creativity fecund and macabre, the picture reminds of Harlan Ellison, Dr. Strangelove, and Dark Star in equal measure. Ultimately, The American Astronaut is something all its own, a film that sets itself up as an old-fashioned serial and goes on to explore cinematic and literary theory with a keen eye for composition and an ear for mad scenario and perverse dialogue. The reasoning is Beckett, the execution is Brecht and Weill, and the results are best described as an educational reel directed by David Lynch circa Eraserhead: self-aware and hallucinatory.

Samuel Curtis (Cory McAbee, acting as director, writer, star, and composer) is a space trader, a procurer of rare items who gives up a cat (named "Monkeypuss") for a cloned pre-woman in a box. He trades that package for a boy (Gregory Russell Cook) on an all-male Saturn colony whose nightly description of a woman's breast (a sight he alone on the outpost has glimpsed) provides the miners inspiration to continue in their labors. Curtis intends to deliver the Boy Who Actually Saw a Woman's Breast to a Venus that, populated only by Victorian women nearly too snooty for their own good, needs a fresh stud every few years to keep their elitism in check. Meanwhile, old pal Professor Hess (Rocco Sisto), apparently angered by a forgotten birthday, pursues Curtis across the solar system, leaving a trail of vapourized innocents in his wake.

Informed by sprung rhythms and the kind of twisted logic conferred by gestalt rather than more conventional narratives, The American Astronaut is a Rorschach Test on film, a series of stills evoking space travel in a kind of Tardis-by-way-of-Appalachia construct (boxy on the outside, a honky-tonk flophouse on the inside), with its most interesting moments coming in a public restroom and in a series of scored stills that reminded more than a little of Pakula's Parallax Test. McAbee's approach is utterly serious, marking the film's illogicalities with the stamp of conviction essential to successful ironies--many of its images (courtesy of inspired DP W. Mott Hupfel III), from flashlights in a space-barn to a madman dancing in a field of ash mounds, are sticky and breathtaking.

While not without its stray lull, The American Astronaut is alive in a way that films just aren't anymore. It's a collection of homage and invention that demonstrates that a knowledge of film isn't a sentence of pomposity and that discursive genius doesn't necessarily predict a cultish incomprehensibility. There's something dangerous and exciting at work in The American Astronaut; the picture is a dry comedy, the throwback to the operatic space serials that George Lucas's narcoleptic spectacles are unfairly credited with being, and so drunk with the possibilities of creation that as a collective experience it is rejuvenating. McAbee, frontman for performance art band The Billy Nayer Show (which composed The American Astronaut's twisted book and score), has made a film that is all possibilities and dreaming--juvenilia elevated to critical theory and high art, heady and delirious with passion and the freedom to stretch.

Sponsored by Space Month: Our Space. Our Future. and CU Film Studies