With Cory McAbee in person 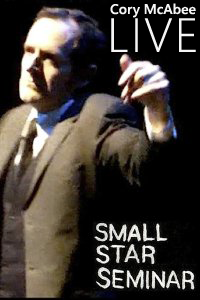 Made possible in part by Space Month: Our Space. Our Future.

Cory McAbee is best known as writer, director, songwriter and composer for the feature films, The American Astronaut (2001), Stingray Sam (2009), Crazy and Thief (2012) and as singer/songwriter for the musical group The Billy Nayer Show (1989–2011). He has created award-winning short films and has worked as both an actor and musician in American and European features.

In 2012 McAbee began the international arts collaborative, Captain Ahab’s Motorcycle Club. McAbee wrote songs for CAMC that were developed by its members throughout the world. From 2012 through 2014 McAbee performed concerts in support of the project throughout the US, Europe and Australia. From 2012 through 2015 McAbee wrote the screenplay for his first feature length opera, while illustrating his graphic novel series entitled RABBIT. In December of 2014 McAbee began recording and producing a solo show, called the Small Star Seminar. The Small Star Seminar premiered in Wroclaw, Poland in 2015 and is available now on Bandcamp.

Small Star Seminar is to be a crowd-generated road film, concert film, documentary and narrative slated for release in January of 2017 with the support of the Sundance Institute. The first leg of the U.S. tour starts here in Colorado - and you are invited to participate by joining us tonight to see Cory perform his solo album as a singing representative of the Small Star Corporation, a company that urges people to give up their goals, stop reaching for the stars and start looking for the stars within their minds.

All live events will be crowd-generated. McAbee will be passed between event organizers and supporters like a baton in a relay race. Artists in each location will capture footage before, during and after the regional seminars that they will help coordinate. This material will be used to create the story for the concert-road documentary to be released in 2017.