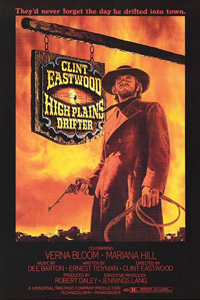 Clint Eastwood made a strong impression with his  third directorial assignment, the Western High Plains Drifter, in which he showed an assured style, influenced by two of his mentors and frequent directors, Sergio Leone (the Spaghetti Westerns) and Don Siegel (“Dirty Harry” and others). Yet Eastwood’s approach is all his own, combining the direct and efficient strategy of Siegel while refraining from the operatic excess of Leone.

End result is one of the best Westerns of the 1970s, a decade in which John Wayne, the main proponent of the genre, made few good pictures.  The only other filmmaker to leave his mark on the genre was Sam Peckinpah.

A morality tale set in the harsh Western desert, the saga begins when a mysterious stranger (the character’s mythic name is “The Stranger”) appears out of nowhere. He rides into the small town of Lagos, where his presence threatens the largely mean and cowardly populace. Before too long, hes attacked by three gunmen, and kills them all coolly. The Stranger than rents a hotel room, and the town dwarf, Billy Curtis (Mordecai), whos also disenfranchised in town due to his stigma, attend to his needs.

At night, the Stranger’s dreams are plagued by a recurring nightmare of a helpless man being whipped to death in the street by some sadistic criminals, while the townsfolk stand by and do nothing to stop him.

This film is yet another critical commentary on Zinnemann’s “High Noon.” Like that 1952 Western, in this one, the town council debates how to handle the impending threat created by a wild bunch of escaped convicts, who are about to return to Lagos (where they committed their crimes) and destroy it. Desperate, the towns leaders cautiously ask the Stranger save their town from the criminals. He agrees to help them, but then proceeds to turn the town on its head by teaching self-defense and requesting all sorts of strange things from the townsfolk, including having the town repainted in red and renaming it Hell.

Most critics saw “High Plains Drifter” as a supernatural Western that takes the avenging man-with-no-name character, created by Eastwood and Leone, to its most logical extreme. Eastwood would later bury the character completely in his own film, “The Outlaw Josey Wales,” only to have him redefined as a much more human, compassionate and caring hero.

Eastwood liked the story’s strange, offbeat quality, and approached Universal with the idea of directing it.  The screenplay was written by Ernest Tidyman, an Oscar winner for The French Connection. Tidyman’s screenplay was inspired by the real-life murder of Kitty Genovese, in Queens in 1964.  The text, which contains black humor, was retouched by Dean Riesner, one of Eastwood’s associates.

Eastwood insisted on shooting the film on location, scouting sites in Oregon and Nevada, before having the entire town of Lago built on the shores of Mono Lake. Additional scenes were shot at Reno, Nevada’s Winnemucca Lake and California’s Inyo National Forest.  The film is beautifully shot by ace lenser Bruce Surtees, who finds the right imagery to illustrate the often surreal and ghostly narrative.

Rather unusually, Eastwood shot High Plains Drifter in sequence, and reliably completed the shoot in six weeks, two days ahead of schedule, and under budget.