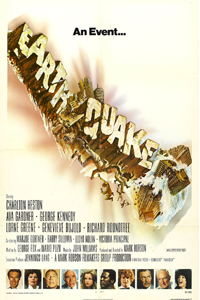 Mark Robson’s Earthquake is an excellent dramatic exploitation extravaganza, combining brilliant special effects with a multi-character plot line which is surprisingly above average for this type film. Large cast is headed by Charlton Heston, who comes off better than usual because he is not Superman, instead just one of the gang.

The film spends its first 53 minutes establishing most of the key plot situations, but regularly teases with some foreshocks the big quake. When that occurs, the first big special effects sequence provides an excellent, unstinting panorama of destruction.