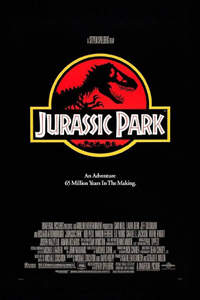 Two months after taking this job in 1993, everything I'd learned about movies began changing.

History was being made by prehistoric creatures inhabiting the year's biggest hit, Jurassic Park.

At the risk of sounding like a dinosaur myself, you shoulda been there, in a darkened theater watching the most realistic behemoths ever manufactured on screen, before spectacle became so common. If you were, you know what I mean.

Steven Spielberg's $60 million adaptation of Michael Crichton's page-turner wasn't simply a game-changer. It was an entirely new stadium for filmmaking, utilizing the developing technology of computer-generated imaging on a grander scale than any movie before.

"Watching Jurassic Park," my review declared, "one gets the same feeling of wonderment, glee and old-fashioned fright that moviegoers must have felt 60 years ago when King Kong roared out of the jungle and scaled the Empire State Building."

Jurassic Park was also the first movie utilizing the then-new Digital Theater Systems audio format, that in addition to Dolby is today's standard in multiplexes. In 1993 only four Tampa Bay theaters had installed DTS, in only one auditorium each. All four of those theaters are closed now.

Nothing before ever looked or sounded like Jurassic Park. Countless movies have since.

There are certain milestones in our lives we remember exactly; where we were, how we felt when JFK was shot or the World Trade Center crumbled. One of mine is the first dino-sighting in Jurassic Park, a gigantic Brachiosaurus filling the screen, slowly strolling by. The stop-motion monsters of Ray Harryhausen's heyday were immediately outdated, replaced by a fluidity of motion and physical detail previously unimaginable.

The expression on my face, and I'm certain those around me in the Alfred Hitchcock Theater on Universal Pictures' studio lot in Los Angeles, was as full of stunned astonishment as Sam Neill and Laura Dern were feigning in the film.

Twenty-two years later, Jurassic Park is an enjoyable relic with its digital seams showing, a mosquito in amber, so to speak, with creative DNA mined by other fantasies. Actually, it didn't take that long for our eyes to be spoiled by the continually advancing state of the art.

"We've grown too accustomed to computers and puppets defying evolution," I wrote in 2001 about Jurassic Park III. "... the wonderment is gone."

A third sequel, Jurassic World, opens in theaters tonight, hoping to revive that feeling. The dino-theme park John Hammond planned in 1993 is open for business with a new attraction, Indominus Rex, a genetically modified monster boosting attendance since what was extraordinary before is now old hat.

Kind of like movies themselves after Jurassic Park opened Pandora's paint box.