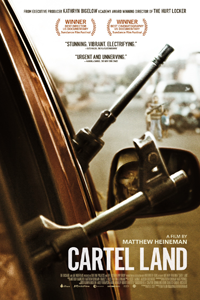 The director Matthew Heineman has a terrific eye. And, to judge from “Cartel Land,” his immersive documentary about American and Mexican vigilante groups, he also has guts and nerves of steel. Serving as the primary cinematographer, he employs a run-and-gun style for much of the movie, using a lightweight digital camera that at times lurches so dramatically that you can visualize the body attached to it. Considering that Mr. Heineman landed in a few shootouts while making this documentary, both his camera moves and its pictorial quality are striking.

What those images show is where this documentary gets complicated. In “Cartel Land,” Mr. Heineman puts you into two outwardly similar vigilante groups, one in the United States and the other in Mexico, that seem to be battling a common enemy in the drug cartels. Each has a (more or less) charismatic leader — Tim Foley, with the Arizona Border Recon; and Dr. José Manuel Mireles, with Autodefensa, a group in the state of Michoacán — who both serves as his group’s mouthpiece and as a narrative hinge. “They’re the ones terrorizing their own country,” Mr. Foley says of the cartels, “and now they’re starting to do it over here.” Dr. Mireles, in turn, asks, “Do we want to die tied up like animals or dismembered like they have been doing for more than 12 years?”

Given how Mr. Heineman introduces Dr. Mireles — with a ghastly story about a murdered family and an image of three severed human heads — these questions about self-protection may sound reasonable and necessary. You may know enough about Mexican drug trafficking and that its war on drugs, which has left thousands dead, to appreciate Dr. Mireles’s questions; and you may also have strong ethical and political views on vigilantism. Yet the film moves so quickly and fluidly and with such unnerving violence that it doesn’t give you much time or space to think through the serious, urgent issues it raises. When you’re confronted with an image of human heads lined up as if they were at a fruit stand or a woman tearfully describing the barbaric murder of a baby, it can be difficult to get past the shock and horror. The dead become the only argument.

It takes a long time before Mr. Heineman introduces anyone who voices objections to the logic, politics and practice of vigilantism. For much of the movie, he switches between Mr. Foley and Dr. Mireles, who register as very different men with distinctive methods, manners, lives and presentational styles. What they share is proficiency with guns, a certain swagger and a similar justification for their groups: The cartels are terrorizing us, the government isn’t protecting us and we need to fight back. Mr. Foley and Dr. Mireles never meet on screen, but the editing joins them, turning the men into a united front. And because they more or less have the floor, as it were, throughout the movie, it becomes a platform for their beliefs.

Mr. Heineman has said that he wanted “Cartel Land” to feel like a narrative film as much as possible, and to an extent it does. It opens with a grabber, features juicy characters and has a discernible story arc, tremendous momentum and a musical score that too often accentuates the obvious. What’s missing is a directorial point of view, including about vigilante groups, the so-called war on drugs, and Mexican and American policies and politics. When Mr. Foley mentions, for instance, that the Southern Poverty Law Center has labeled his organization an extremist group, the comment simply hangs there. Mr. Heineman doesn’t ask Mr. Foley if the charge has justification or press him on whether that plays into why he trains his sights on the border. Mr. Heineman just keeps shooting, running and gunning.