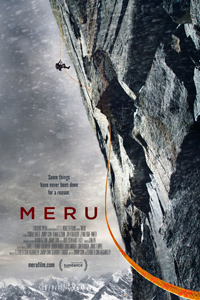 To dedicated mountaineers, an unconquered — and believed unconquerable — peak is an irresistible, insistent taunt on their to-do lists. “Meru” is the story of one such peak, the notorious Shark’s Fin atop Mount Meru in India and the pea beneath the mattress of the climber Conrad Anker.

Blindingly beautiful and meticulously assembled by the award-winning editor Bob Eisenhardt, “Meru” easily makes you forget that what you are watching is completely bananas. Having failed to reach the summit in 2003, Mr. Anker returned in 2008, accompanied by his longtime climbing partner Jimmy Chin (who directed the film with his wife, Elizabeth Chai Vasarhelyi) and the young climber and artist Renan Ozturk.

That expedition, and a later one in 2011, bookend a middle section that’s every bit as tense as the two ascents. Yet it’s not only the near-fatal mishaps and knife-edged escapes that ultimately make “Meru” so compelling. Assisted by essential commentary from the author Jon Krakauer, the directors poke at the psychology of extremity, zeroing in on push-the-limits personalities for whom calculating risk is a way of life.

What makes a man want to haul 200 pounds of equipment more than 20,000 feet above sea level in well-below-zero temperatures? Watching Bear Grylls rappel cheerily down a cliff face doesn’t prepare us for the blizzards and avalanches, frostbite and trench foot visited on our three daredevils, all of whom brave terrifying events with enviable composure. The audience might not feel so Zen-like: When the camera places you inside a tiny tent that’s seemingly dangling in midair, listening to shards of ice batter the roof, you’ll be very glad to feel the theater seat beneath your behind.

Thankfully free of the usual triumph-of-the-will score, “Meru” is an ultrasmooth blend of conventional documentary techniques — the talking-head interview; the back-in-the-day photograph — and uncommon ambition. The immediacy and clarity of the images (Mr. Chin and Mr. Ozturk did most of the filming) is critical, capturing the grandeur of the Himalayas in shots both mystical and menacing. So when Mr. Krakauer describes the mountain’s location as “the point where heaven and earth and hell all come together,” his meaning could not be clearer.

Jenni Lowe-Anker, Mr. Anker’s wife and the widow of his mentor, Alex Lowe, understands the draw of danger so well that she didn’t plan to fall for another climber. “I still think I might’ve been better off with a cowboy,” she tells us, smiling. Some might say that’s exactly what she got.